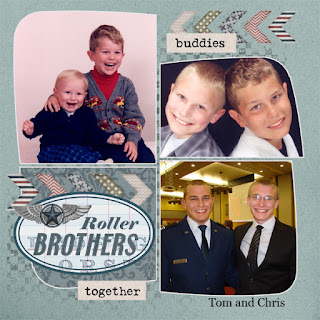 Updating an album today and decided to redo the Roller brother page with more updated photos.  Love how this turned out.
Posted by Shannon Roller at 7:42 PM No comments:

Concerts in the Park 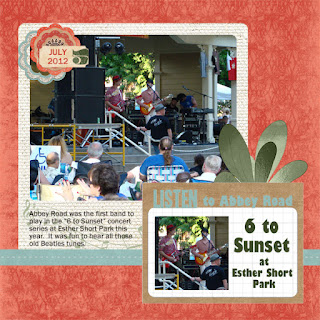 There is always so much to see and do in the summer here.  One of the great parts about summer in Vancouver is that the city puts on free concerts at Esther Short Park--Wednesday at noon and Thursday at six.  They also have some movies in the park on Friday nights too.  Bill and I went to four Thursday night concerts as part of a fundraiser for the Children's Center last year that was held in conjunction with these free concerts.  This year--Bill and I went to the first one which was Abbey Road.  I know that they have been at the East Fork Winery a lot but we have never seen them perform before.  It was fun to go listen to those old Beatles songs that night. 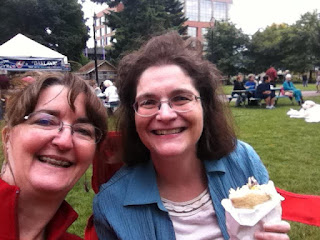 A week ago, I didn't have to work until the evening shift so I invited my friend from work, Jill, to go with me to hear Justin Klump sing.  He is a member of Chris' church and is active with the youth group there so all the interns from church went to hear him sing as well.  He is a folk singer and I had never heard him sing his own music before so I was really interested to hear him.  Apparently he is getting ready to move to Nashville.  Chris was funny because he said that they are disappointed that he was leaving to "live out his dream."  I had to laugh.
Posted by Shannon Roller at 7:40 PM No comments:

A Day at Maryhill Museum 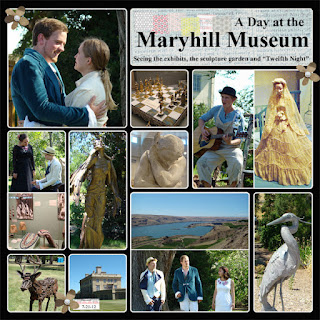 Bill loves the Columbia River Gorge, the Maryhill Museum and Shakespeare in the Park.  So when I saw that the Portland Actors Ensemble was going to be performing "Twelfth Night" at Maryhill Museum, we decided that we had to go.  Because of Beverly's stroke last year, we weren't able to make it to any of the Shakespeare in the Park performances so he really wanted to start going again.  The last one that we went to was two years ago at Maryhill.

It had been quite awhile since I had been inside the Maryhill Museum so it was fun to see the exhibits again.  Their permanent exhibits include furniture, gowns and other memorabilia from the collection of Queen Marie of Romania; a post-WWII French fashion exhibit, American Indian art; Rodin sculptures; and a collection of chess sets from around the world.  The museum has a new wing that they just opened that has a few collections in it and a new education center and cafe.  And the view from the balcony of the cafe is wonderful.  Bill and I could have sat there all day admiring the scenery.  They also have a sculpture garden which is where they put on the play.  It is fun to wander and look at the sculptures as well.

I enjoyed the play very much.  I prefer the Shakespeare comedies so "Twelfth Night" was a fun one for me to see.  The actors were quite animated and made it very enjoyable.

On the way home we stopped in Stevenson to have dinner at the Walking Man Brewery and picked up a couple of growlers of beer.

It was a very full day but a lot of fun.
Posted by Shannon Roller at 2:59 PM No comments: 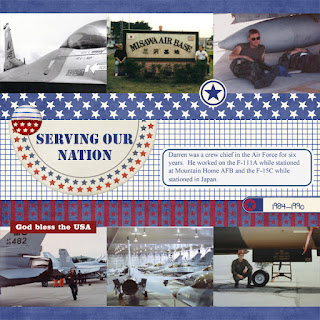 My brother, Darren, just recently friended me on Facebook.  I didn't realize he had an account but I guess he had started out small back in January and has just recently started adding friends.  But I did find that he had started posting a bunch of pictures from his Air Force days in the 80's--especially from his time in Japan.  His unit has a Facebook page where they have been sharing their pictures.  It has been so fun to look at those pictures.  And I have always been impressed that he has had his name on fighters as the assigned crew chief.  Very cool!
Posted by Shannon Roller at 11:50 PM No comments: 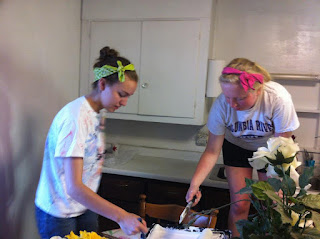 I won't be able to get pictures of Christopher to scrapbook for at least a month but Christopher got home from a week in Yakima and Wapato, Washington on Saturday.  The Columbia Presbyterian Church youth group went to work on two homes in Wapato--37 youth members and around 10 adults.  One of the homes received a lot of work from the kids including tearing off and replacing the roof and painting the inside.  The project Christopher worked on was at the other home.  He helped dismantle and rebuild a wheelchair ramp. 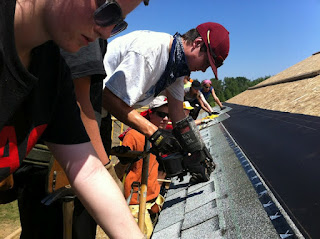 Unfortunately, they experienced 100 degree heat so it made it difficult for them to get the projects done comfortably.  For instance, the tar paper and roofing materials were too hot to handle in the afternoon--even with gloves on.  And they struggled with staying well hydrated.  But it was a successful trip and the work was accomplished.

Outside of working on the homes, they got to hear speakers from the Yakama Nation to learn about their culture and customs and go to one of their homes for a salmon and fry bread dinner along with some drumming and dancing.  They also went intertubing on the the Yakima River which I understand was very cold with the runoff from the mountain snow and glaciers.

Proud of Christopher and all the youth for the work that they did last week.
Posted by Shannon Roller at 12:26 PM No comments: 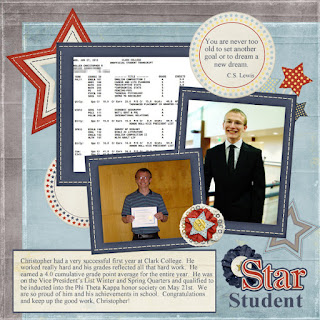 Chris got his grades back a few weeks ago but I just worked on this layout for him.  He finished the school year with a 4.0 cumulative GPA and made the Vice President's List for the Winter and Spring quarters.  He worked really hard and it is nice that this grades reflected that.  Congratulations Christopher!  Keep up the good work!
Posted by Shannon Roller at 12:00 PM No comments: 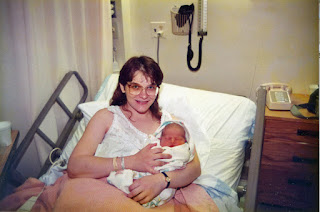 Twenty three years ago, Tom was born a military baby in Massachusetts--although it was short lived since both Bill and I got out of the Army shortly after he was born.  Today he is just starting out on his own military career in Pensacola.  This is the first time that I won't be able to celebrate his birthday with him.  But I am hoping that he enjoys his day. 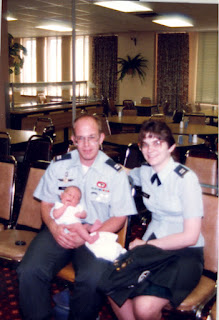 Posted by Shannon Roller at 8:19 AM No comments: 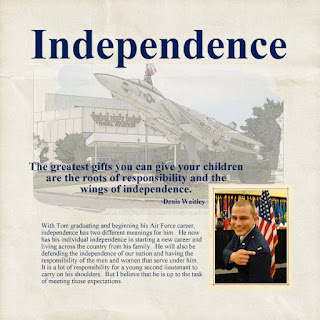 I've already blogged about Tom's new found independence through his graduation and commissioning, the purchases of his cars, and moving across the country to Pensacola.  The digital scrapbooking challenge for the week was to do a layout that the title was "Independence" though.  So I did one more that addresses how independence has two meanings for Tom at this point.  He now has his individual independence from us as parents but he also has chosen a profession in which he will be defending the independence of our nation which is a pretty tall order.  But I think he is up to the challenge.

I have been admiring the watercolor layouts I have been seeing lately and found out where everyone was getting their instructions and inspiration from.  So I decided to give it a go with the Air Museum photo as a background for my layout.  I think it turned out pretty good if I do say so myself.  For anyone who is interested, here is the link to the instructions.
Posted by Shannon Roller at 1:00 PM No comments: 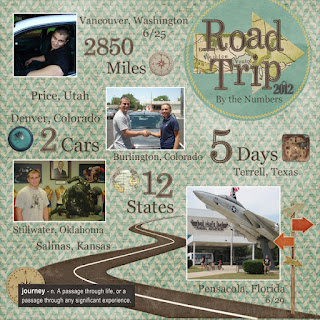 I have already blogged a bit about Tom and Bill's trip to Pensacola but I decided I wanted to do a layout of it.  When Tom arrived in Pensacola, his Facebook post was all about the numbers on what it took to get there.  It sparked an idea for a layout so here it is.  Love this Life's Journey kit a lot. 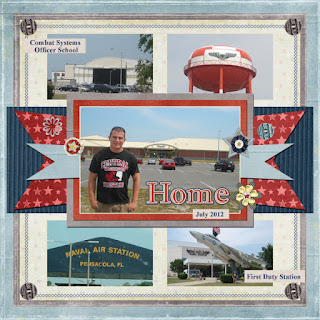 I had Bill take pictures of Pensacola so that I could do a layout of Tom's new home in Pensacola.  Unfortunately, Tom wasn't able to move into his quarters until yesterday--so no pictures of where he is actually living but got pictures from the gate, the airport, his school and the air museum anyway.
Posted by Shannon Roller at 10:30 AM No comments: