Last weekend was a really busy one for me. 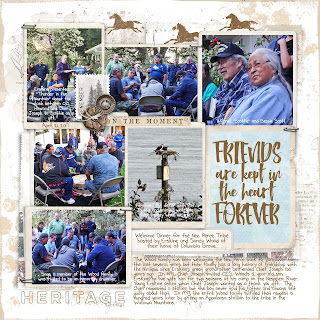 Friday night, Bill and I were invited to a dinner hosted by the Erskine Wood family at their home on the Columbia River.  They have held this dinner for the last several years to welcome the Nez Perce tribe to Vancouver.  Pat Jollota was invited to attend and she was allowed to bring guests so she took us there.  There is a longstanding history between the Wood family and the Nez Perce tribe.  Erskine's great grandfather befriended Chief Joseph and his son, also named Erskine, was sent to live with Chief Joseph for two seasons.  Later, Erskine would invite the Nez Perce to his home-the same one we had dinner at-when they had business to attend to in Portland.

When Erskine lived with Chief Joseph, he asked the Chief what he wanted for a thank you gift and the response was a stallion.  The young man didn't tell his father and always regretted that the promise was never fulfilled.  Twenty years ago, his descendants purchased an Appaloosa stallion to present to the tribe in the Wallowa Mountains.  Since that time, the family has befriended members of the tribe and welcome them as old friends and continue the tradition started by their grandfathers.

The evening was so pleasant that we decided to eat outside.  As we ate, we watched some osprey in their nest on the river.  That provided some pleasant entertainment during dinner.  Later, the drummers started singing and gifts were presented.  They also asked Sage--a member of the Wood family-to drum with them. 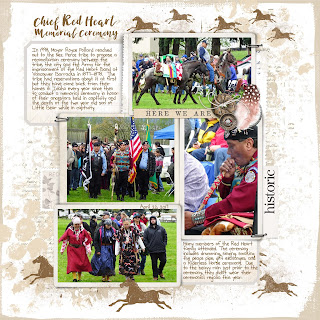 For the last twenty years, the Nez Perce have come to Vancouver to hold a memorial ceremony.   The Chief Red Heart Band was imprisoned at Vancouver Barracks from 1877-1878.  They didn't fight.  They just wanted to stay on their land.  While they were imprisoned, the two year old son of Little Bear died.  In 1998, Mayor Royce Pollard reached out to the Nez Perce asking if they were interested in a reconciliation ceremony between them, the city and the Army.  The tribe had reservations about it but it apparently was a good experience because they have been coming back every year since then.

I have been to one other ceremony.  I don't remember when.  But the ceremony consists of honoring those that were imprisoned there and the baby that died.  Gifts are always given to the youngest child and a two year old child that attends the ceremony.  When Sage (the young man I mentioned that was asked to be an honorary drummer) was a young baby, he was the one to receive the Indian baby blanket that year.  Veterans are honored and given gifts.  There is a Riderless Horse ceremony, smoking of the peace pipe, etc.  It was raining so hard just prior to the ceremony that I almost didn't go at all.  And the riders didn't wear their ceremonial headdresses and attire so that they wouldn't get ruined.  That was a little disappointing from a selfish photographic standpoint but certainly understandable.

I wanted to go to the meal put on after the ceremony and I did wait for awhile but with as much as I had going on that day, I ended up leaving before the meal was served. 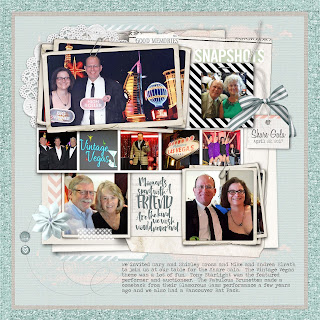 Saturday night was the Share Gala at Warehouse 23.  Bill works with them frequently on videos for their fundraising events so we got a table and invited a few friends.  The theme was Vintage Vegas which was fun.  There were performances by a local talent who does music from that time period as well as from the Fabulous Brunettes-a group of women who made a comeback from their Glamorous Gams competition a few years ago-and a Vancouver Rat Pack that included our mayor and a mayoral candidate this year.  They had gaming tables for script setup after the dinner and auction were done as well.  Fun evening. 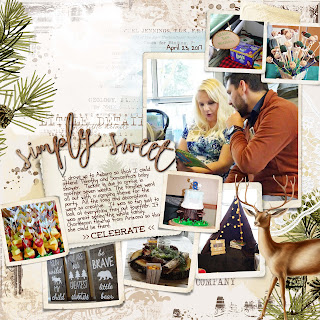 Sunday morning I drove up to Auburn for a baby shower.  This was the most amazing baby shower I have ever been to.  The grandmothers went all out with the food and the decorations.  It was fun just to look at everything.  And was fun to see my friends and their family and have a part in welcoming Tucker to the world. 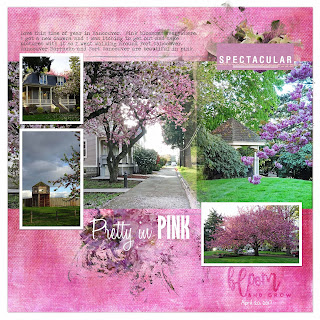 I bought a new camera and was itching to try it out.  I had an evening to myself and it quit raining so I headed out to the Fort Vancouver National Site to get some exercise and take photos.  I took a lot more photos but I especially wanted to capture how beautiful the trees are this time of year.  The tulip and plum trees were done flowering by this time but the cherry and apple blossoms were just right.
Posted by Shannon Roller at 8:21 PM No comments: 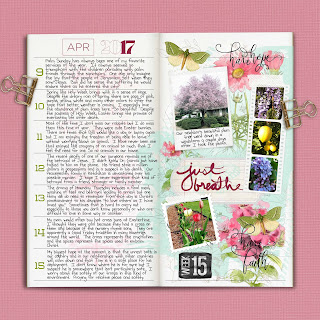 I started a new type of album this year.  Those in the digital scrapbooking world call them various things-Project Life is the most common term used for it.  I have never done one before.  I have never thought I could come up with enough ideas for photos and what to say about my everyday life that would be all that interesting to keep up a year long project.  I saw a fellow scrapbooker had started an album using journaling prompts for each day.  After I saw that, I got the itch to start my own album using the same idea.  I have a couple of different journal prompt lists to refer to if I don't know what I want to write about for a particular day and so far I am keeping up pretty well and looking forward to what I can create and write about next.  I don't share a lot of these pages as some of them are pretty personal.

The week before Easter, I decided I wanted to do a week about Holy Week.  I did some research and found out some things that I never knew before.  It was fun trying to incorporate my Holy Week findings in my album. 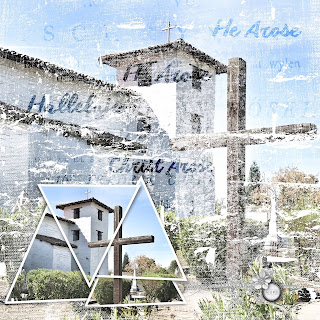 I also try to slip in an Art Journaling page each month.  I took this photo while I was visiting a mission in Fremont, California a few weeks ago and thought it would be the perfect art journaling photo for this month. 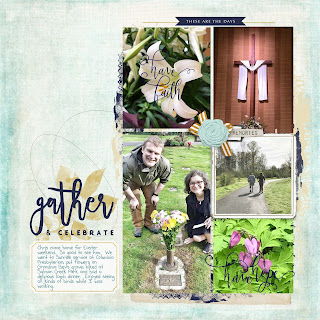 Christopher came home for Easter weekend.  We haven't seen him for two months so we were excited to have him home.  We went to sunrise service at Columbia Presbyterian.  While we sat there, I thought a lot about Beverly and how much she loved this congregation and insisted we go to the store and buy flowers to put on her grave before we went home.  I wanted the three of us to go together as a family to her grave.  Afterward, it was a beautiful day so we went to Salmon Creek Park to go for a walk.  I enjoyed seeing some herons and osprey as well as a lot of other birds.  Fun way to spend a few hours in nature.  We went off our diet for the night.  We had rack of lamb, roasted vegetables and a yogurt/fruit parfait so we weren't too far off program-just the meat. 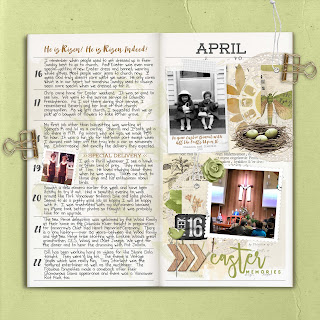 Another sample of my journaling project.  Since there were some Easter memories in it, figured it would fit here for posting.

Hoping everyone had a wonderful Easter as we did.

Posted by Shannon Roller at 9:48 AM No comments:

Bill wanted to go to a conference in San Jose so he invited me to go along with him so I could enjoy some California weather and visit Chuck and Suzanne.  Other than a really crappy 24 hour layover in San Francisco a couple of years ago, I don't think I have been to visit Chuck and Suzanne in the Bay Area for at least 15 years.  Chuck always came up here to see Beverly and us so there wasn't really ever a need to go down there. 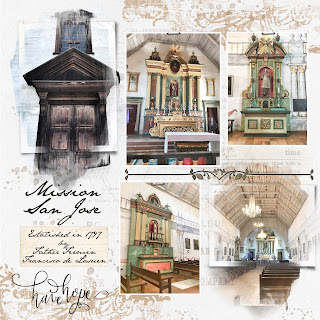 I didn't really have any big agenda for my trip but made some tentative plans for places that I wanted to visit and photograph.  Going to see Mission San Jose in Fremont was one of them.  I was surprised that the original chapel had been destroyed in an earthquake and that this one had been reconstructed in the 1980's. 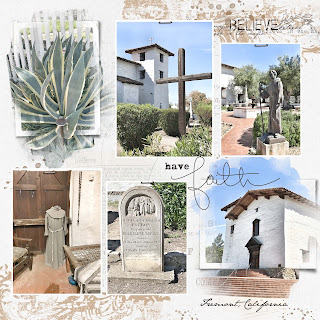 There was a museum in some of the old adobe buildings near the chapel, a cemetery where people are still buried in even today and a pleasant courtyard.  I was expecting to see a lot of Spanish names in the cemetery but was surprised to see how many Irish immigrants were buried there. 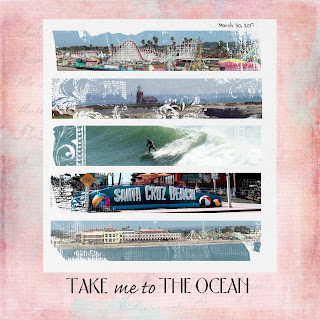 The next day I dropped Bill off at the conference and headed down to spend the day in Santa Cruz.  It was a beautiful day so it was quite enjoyable. 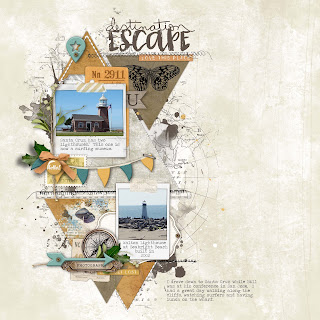 I enjoyed seeing the lighthouses, watching the surfers and looking at the beautiful coastline there. 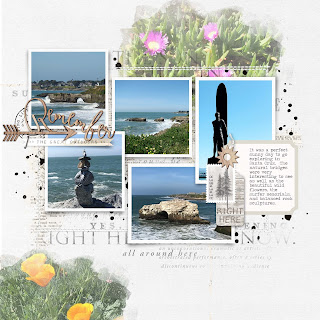 I did a lot of walking and ended up having lunch at Woody's on the old historic wharf before I headed back to San Jose.

The rest of the weekend was spent having lunch in Palo Alto with Maddy's Aunt Maia and spending time with Chuck and Suzanne going to a German restaurant in Alameda and wine tasting and having lunch at a Greek restaurant in Livermore.  Murrieta's Well was a really pleasant winery to just sit on the patio and enjoy the wines. 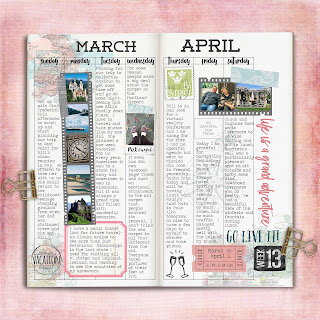 I've started a new journaling album concept this year.  So this is some of what I journaled about my time in California including some photos from our wine tasting and lunch excursion into Livermore. 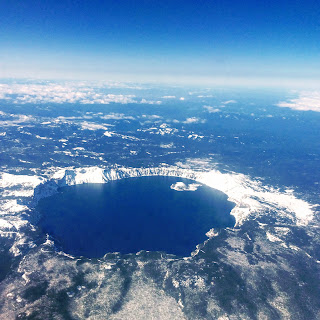 We had a great view of Crater Lake on the way home so I was able to take a photo of that.

We had a great little getaway.  We were happy to get home but not necessarily to go back to work today.  Anxious to go on our next adventure now.
Posted by Shannon Roller at 8:57 PM No comments: