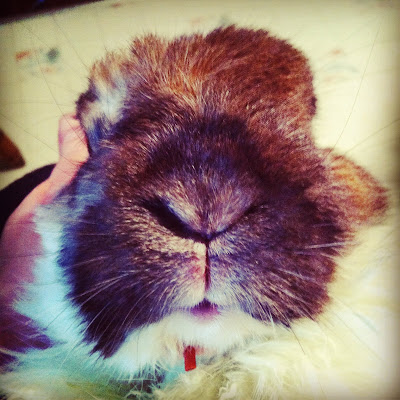 The past month and a half has been very eventful on the bunny front. Poor Ranger has been miserable. He started out with an eye infection and skin infection on his right side and under his chin from scratching at his eye. The vet put him on eye drops and oral antibiotics. But less than a week later he quit eating. And when a rabbit quits eating, they don't live very long. So off to the vet we went again. But since our vet doesn't really specialize in rabbits, he didn't have much to offer. Just gave him some Reglan and said if he isn't eating by tomorrow, bring him back. I was afraid Ranger was going to die that night so I called the vet to see if there was anything else that we could do for him. He did suggest that we might take him to an exotic pet specialist in Beaverton--25 miles away through Portland so with traffic it often ends up being an hour or two trip.

What a difference it was going to see someone who specializes in rabbits. The doctor spent about 45 minutes talking to us and examining Ranger. He was so knowledgeable. And they had much more specialized equipment than I have found up here in Vancouver. As it turns out, a combination of the oral antibiotics that Ranger was taking and peanut butter for treats that Chris shouldn't have been giving him was at least a portion of why Ranger stopped eating--at least that was the thought at the time. In retrospect, it had much more to do with his teeth--but I am getting ahead of myself in the story. In the process of the exam, he found a small abscess under Ranger's chin--small enough that he almost missed it. Said he might have if it hadn't been for the fact that his chin was shaved. So we had to do bunny intensive care to get him back to eating. I had to syringe feed him a special diet and give him Reglan and probiotics twice a day in order to get his bowels back working and then once his digestive system was back on track, he would need surgery to remove one of his bottom incisors and drain the abscess.

So three weeks ago, I took him in for his surgery. As it turns out, not only did he need his abscessed tooth taken out but he needed nine other teeth extracted on his right side--all his right sided teeth. They were all rotten and so loose that they practically fell out. No wonder he didn't want to eat. So it was back to syringe feedings and adding flushing and packing his drain and wound under his chin and trying to get him to take his antibiotics which he doesn't like. He has just started getting to the point that he is eating a little bit of hard pellets and not just the softened pellets that I have been making for him. And drinking some water which he hadn't been doing either. I just had him to the vet yesterday for a followup check up and he needed his drain left in and flushed for two more weeks. Then today the stitch in his drain came loose and the drain fell out.

With all the vet visits, surgery and medications, this little bunny has gotten to be very expensive. I never thought I would ever allow myself to spend this much money on a rabbit for vet treatments but he is a very loved bunny. Even more, I hate that I have to hurt him all the time to do his treatments. The poor guy is just a wreck. Hopefully we can keep his wound open without having to put the drain back in but I am skeptical. He may need another sedation to get the drain put back in.

So we need continued bunny prayers to get this poor boy back to health. I would hate that he doesn't make it after all this money and effort to keep him alive.
Posted by Shannon Roller at 3:08 PM 1 comment: