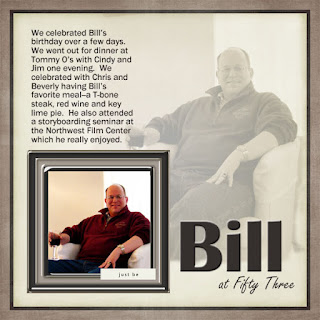 We decided to celebrate Bill's birthday a few days early and it has been a three day celebration festival.  We hadn't seen our friend, Cindy, and her husband, Jim, since Halloween so we went out to dinner to Tommy O's with them Friday night.  It was good catching up with her.  Unfortunately, her eyesight has deteriorated even more than it had been and has been causing her to feel ill with headaches and dizziness.  So she has been on leave of absence from her job and has finally made the decision that she needed to resign.  I feel so badly for her.  She was out of work for so long because of her blindness and was finally able to get into a position that she was able to work but she was only able to do it for about a year.  Hopefully she will start feeling better soon and will be able to figure out a new avenue to work so that she feels fulfilled and that she is making her contribution to her family.

Bill took a storyboarding class at the Northwest Film Center in Portland yesterday.  He has taken screenwriting courses and lighting courses there before.  His dream is to make a movie some day and in the meantime, he is using the classes to improve his various video projects that he does for Rotary.  He seemed to really enjoy the class.

His birthday dinner request was a T-bone steak and key lime pie.  He is in a weight loss challenge at the moment so he has been really trying to lose weight in the hopes that he can win the challenge.  So I told Beverly to ask for the smallest T-bone that Butcher Boys had.  I swear that is was at least a 12 oz steak the way it was--and it was the smallest one that they had.  So he got his red meat fix that will hopefully last him awhile.  And he got his favorite dessert of key lime pie and will be able to get another piece tonight for dinner.

Since he had such a big steak, he decided he had better take a long hike today before he went to his weigh in tonight.  So he drove out to the gorge to hike at Hamilton Mountain.  Then dinner at Beverly's again tonight--pasta primavera--another one of his favorites.

So all in all, I think he has had a very nice birthday festival.  Happy Birthday Honey!
Posted by Shannon Roller at 1:35 PM No comments: 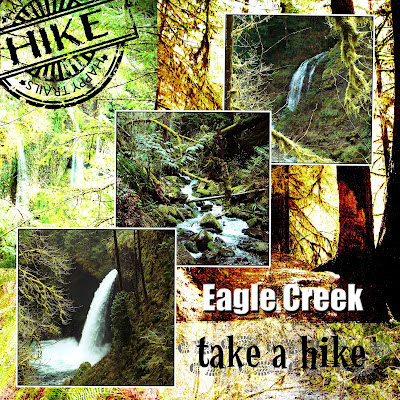 This first week of April is always a hard time for me. It is Mom's birthday and the anniversary of her passing. It has been 25 years since she died but I still miss her. She would have turned 75 on Tuesday if she were still alive and today on this Good Friday was the 25th anniversary of when she died. Because I have been working such long hours, I decided to take Tuesday and today off.

I indulged myself in some shopping on Tuesday. I wanted to get a new dress for Tom's commissioning ceremony. I got a dress with a little sweater to go with it, matching jewelry and shoes and got a purse to replace the one that I had that is starting to fall apart. I might actually wear the dress for Easter and Mother's Day as well as it is a very springy dress. It felt good to get an outfit accomplished.

Chris and I went to do a little bit of hiking in the Gorge today. We went to Eagle Creek--neither of us had ever been there. I was really hoping to get as far as Punch Bowl Falls--a fairly well known falls but there was a water crossing over a log that scared me so I couldn't bring myself to cross it to get there. I was too afraid of falling. Chris managed to see it though and thought it was "pretty cool". I did enjoy seeing what I was able to see though. There are several smaller falls all along the creek. I suppose they might have names but they weren't mentioned on any maps that I saw. I did get to see Metlako Falls from a distance though and it was quite lovely. It is always fascinating to see the moss covered tree and the rapids in the creeks and rivers of this area. We really do live in a beautiful part of the country.

As I was driving to the Gorge, Chris was a little surly. I wanted to spend the day with him. It was the last day of his spring break and I wanted to do something special with him. He wanted to hike but I'm not able to go as far as he can so he wasn't happy that I didn't want him to spend all day hiking without me. As we were going through our little disagreement, I couldn't help think about how much I would love to spend a day with my mom right now. I ended up letting him go on his own for as long as he wanted to go. I took my time since it is hard for me and I like to stop and enjoy the scenery and look for picture taking opportunities. He didn't end up going as far as he intended but seemed to enjoy it in the long run.

On my own in the beauty of that place, I reminisced about my mom and about Jesus on this Good Friday. Looks like Chris and Bill want to go hiking tomorrow--so I may try to join them again.
Posted by Shannon Roller at 8:36 PM 2 comments: