Bill has had a dream of making movies for quite some time now. He dabbles in making videos for CAA or Rotary functions on occasion with some pretty good responses from his audiences. This winter and spring he is taking a screenwriting course at the NW Film Center School of Film in Portland every Monday night. At last week's class, his instructor said that he was introducing several short films on Sunday night and encouraged the class to attend. Bill invited me to go with him.

There were four short films that were shown before the feature presentation. As one might guess of a school of film, these were very artsy and/or edgy short films. "Ryan" and "Bingo" were computer animated films that were rather dark. "Ryan" was essentially an interview with a fellow animator. "Bingo" was a fanciful circus animation. "Next Floor" was actually rather funny and well done but it went a little too long at 11 minutes. It was a black comedy about gluttony in which there is a group of people dining on huge amounts of food--some of which looked pretty disgusting--waited on by many waiters. At some point, the whole table falls through the floor and the maitre de orders all the waiters and musicians to move to the "Next Floor" to continue their service. This keeps happening over and over again--so as you can imagine--it got a little old at some point. The last short was "Delusions of Modern Primitivism"--another comedy that was a bit on the dark side. I wasn't able to actually watch much of it because it is filmed in that same jiggly film style like the "Blair Witch Project" that makes me urpy. It was about a young man that decided that a body full of tattoos and piercings wasn't enough body art. He wanted a gunshot wound as another expression of body art. So he hired somebody in a garage to shoot him and then get him into an ambulance to get medical treatment. All of these films were rather disturbing on some level or another so I wasn't really sure if I was really happy that I decided to go on this adventure or not. But the feature film was actually very charming. 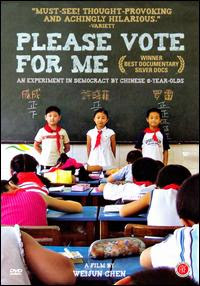 "Please Vote for Me" was the feature film about a third grade class in China that had a democratic election for class monitor. When asked what democracy or voting were, these children had no idea because of their culture. Elections only take place within the Communist Party. The purpose of making the film was to see how democracy would be received if it ever came to China. The documentary follows these children, their classmates and their families through a week of talent contests, debates, speeches, behind the scenes sabotage and bribery. At times, the kids got pretty emotional with hurt feelings and disappointment. But the children were delightful and it was fun to get a glimpse into what Chinese homes and schools looked like and the kinds of activities that they engaged in. It was interesting how they definitely caught on to the concepts of democratic elections. The "incumbent" who had been selected by teachers for the two proceeding years won the election even though all the kids disliked how he always beat them into behaving in class. But he had the best bribes--so my guess is that is how he managed to pull off the election. Seeing this film made it worth going. It was a very fun documentary.
Posted by Shannon Roller at 6:05 PM 1 comment: 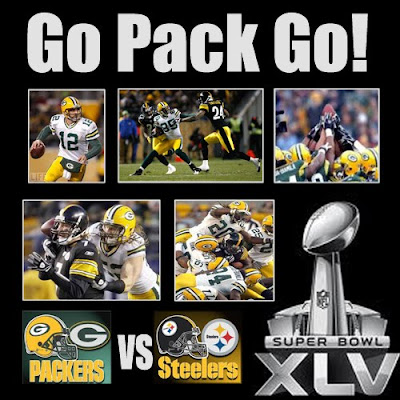 So excited that the Packers are in the Super Bowl this year. With the way their season had been going, I wasn't so sure that is was possible even though during pre-season many were predicting that they would be. So many players injured and so many games lost--even though none of their six losses was by more than 4 points. But they started coming on right at the end of the season and continued to beat their way through each of the playoff games to make it to the big game. So hopefully they can beat the Steelers in their fifth Super Bowl appearance to get their fourth Lombardi trophy. Go Pack Go!
Posted by Shannon Roller at 4:43 PM No comments: 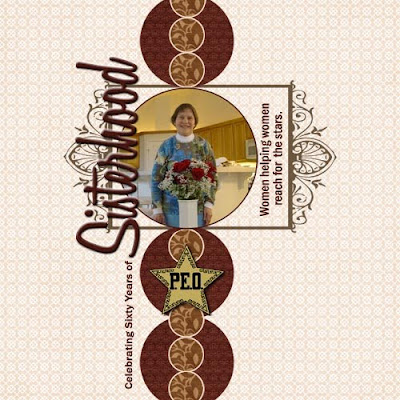 Beverly received roses from her P.E.O. chapter this week celebrating 60 years as a member. She was inducted into her mother's chapter on January 2, 1951. Geneva Van Orden joined the P.E.O. in 1934 and was a member until her death in May of 1997. Geneva insisted that Beverly was going to join the P.E.O. at the age of 18. She was president of Chapter BL in Tulsa at that time and called a special meeting to discuss and induct Beverly as a member before she returned to Cornell College after Christmas break. Beverly remembers having the meeting at their home and having to cook dinner for the dozen or so members that came for her induction. She said that she had to sit in her bedroom with someone standing guard over her while the chapter discussed whether she was an appropriate candidate or not. Beverly has been involved with chapters all over the country over her 60 years as a P.E.O. sister. She joined Chapter E in Buffalo, New York in 1961; Chapter FI in Denver, Colorado in 1973; Chapter RW in California in 1990; Chapter HT in California in 1993; and Chapter HL in Vancouver, Washington in 2002.
Posted by Shannon Roller at 8:27 AM 3 comments: 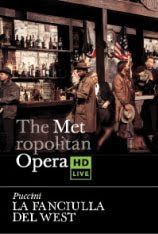 Bill has recently developed a love for opera. I'll admit. This has me roll my eyes. In what little exposure I have had to listening to or seeing opera productions on TV, I have not enjoyed it. The high notes from the sopranos and tenors in particular set my teeth on edge. I might even be a bigger fan of the music itself--if they just wouldn't sing in that operatic style. There are some orchestral versions of opera music that I love. The operas that I have attended in the past were Andrew Lloyd Webber productions like "The Phantom of the Opera" and "Les Miserables" that were in English. I love the music from those productions as they actually are more in the musical style than opera but I found seeing the actual productions disappointing--too long and boring. Bill thinks that Andrew Lloyd Webber is overbearing and thought if I could only see an opera production other than Andrew Lloyd Webber that I would enjoy it as much as he does. In the past few months, he has been to three productions of the Metropolitan Opera in HD at a movie theater in Portland that shows them. This was the fourth and in order to not dismiss it without actually seeing one, I consented to going to "La Fanciulla Del West" which means the Girl of the Golden West as it was supposed to be a lighter opera. 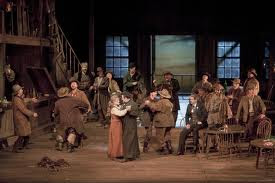 This is the 100th anniversary of Puccini writing "La Fanciulla Del West". He wrote it to appeal to his American audience. It takes place in a California gold rush camp. The bar owner, Minnie, is loved by all the miners and fought over. The sheriff, Jack Rance, is one of her suitors despite the fact he is married. But in walks Dick Johnson, a bandit that came with the intention of stealing the gold being stored in the bar, and he sweeps Minnie off her feet. The sheriff shoots Dick and wants to arrest him but Minnie cheats at a game of poker to win his freedom. After Dick recovers from his injuries, he is captured by the men in the camp and Minnie tries to appeal to them to let him go. Because of their love for her, they allow them to leave the camp to start a new life for themselves--although the opera ends with the sheriff making it look like he was going to go after them and kill Dick.

I can't say that I enjoyed the production all that much. I have to admit it did have its moments that were fun but for the most part, I found it to be too long and not very engaging. As with my past experiences, I might enjoy one act but find the rest to be tedious. And the singing hurts my ears and gives me a headache. It does pain me that I don't enjoy them as much as Bill does. I know this is something that he has been hoping that we could enjoy together--especially as we get closer and closer to being emptynesters. I just find it to be pure torture to sit listening to it for any length of time.

While I didn't necessarily enjoy it myself, I definitely would recommend to anyone that does enjoy opera that they see if they can find someplace that shows the Metropolitan Opera on HD. They present a live production every month and usually show it one other time prior to the next live production. The sets and costuming are wonderful. And you actually have a better seat than you would in an opera theater with all the closeups that they do in the videotaping of the production. Between acts there are intermissions to allow time for changing sets. What I did find fascinating is that they showed all the behind the scenes taking down and replacement of the sets. And before the opera starts and for portions of the intermissions, they interview the singers, stage managers, conductor and others involved in staging the opera. That is what I found more interesting than actually seeing the opera itself. And the cost is pretty reasonable compared to going to an actual stage production of an opera. Tickets here in Portland are $25 to see it in the movie theater. So while I doubt that I will be going to many more operas in my future, I definitely wanted to recommend to anyone that does love opera that this is a great way to see it for a reasonable price.
Posted by Shannon Roller at 4:36 PM 2 comments:

A Date with Music 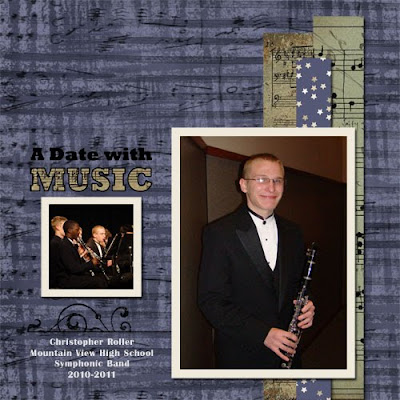 Christopher had a band concert last night. I wanted to get a picture of him in his new tuxedo uniform. He cleans up pretty well.
Posted by Shannon Roller at 4:50 PM No comments: 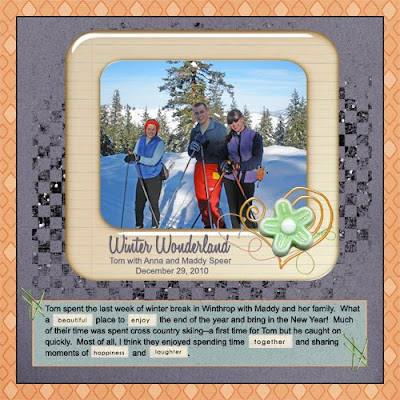 Tom left right after Christmas to go to Winthrop, Washington to spend the last week of break with Maddy and her family. It was a long day's trip for him--starting out from the Portland Greyhound station at 8:30 in the morning, changing buses in Seattle to go to Wenatchee, travel delays on the bus due to the snowstorm and then getting picked up by Maddy's dad for the last leg to Winthrop. He didn't get to the cabin until 11:30 that night. Winthrop is pretty far north in Washington--very close to the Canadian border.

It was up bright and early the next morning to go cross country skiing for the first time. He caught on pretty quickly and enjoyed it. Much of their time there was spent skiing although once New Year Eve arrived, the temperature was too cold to enjoy it so they spent the rest of their time in the cabin reading and watching movies.

New Year's Day they went back to Kirkland and then back to Ellensburg Sunday night after enjoying watching the Packers beat the Bears and get into the playoffs.
Posted by Shannon Roller at 2:17 PM No comments: