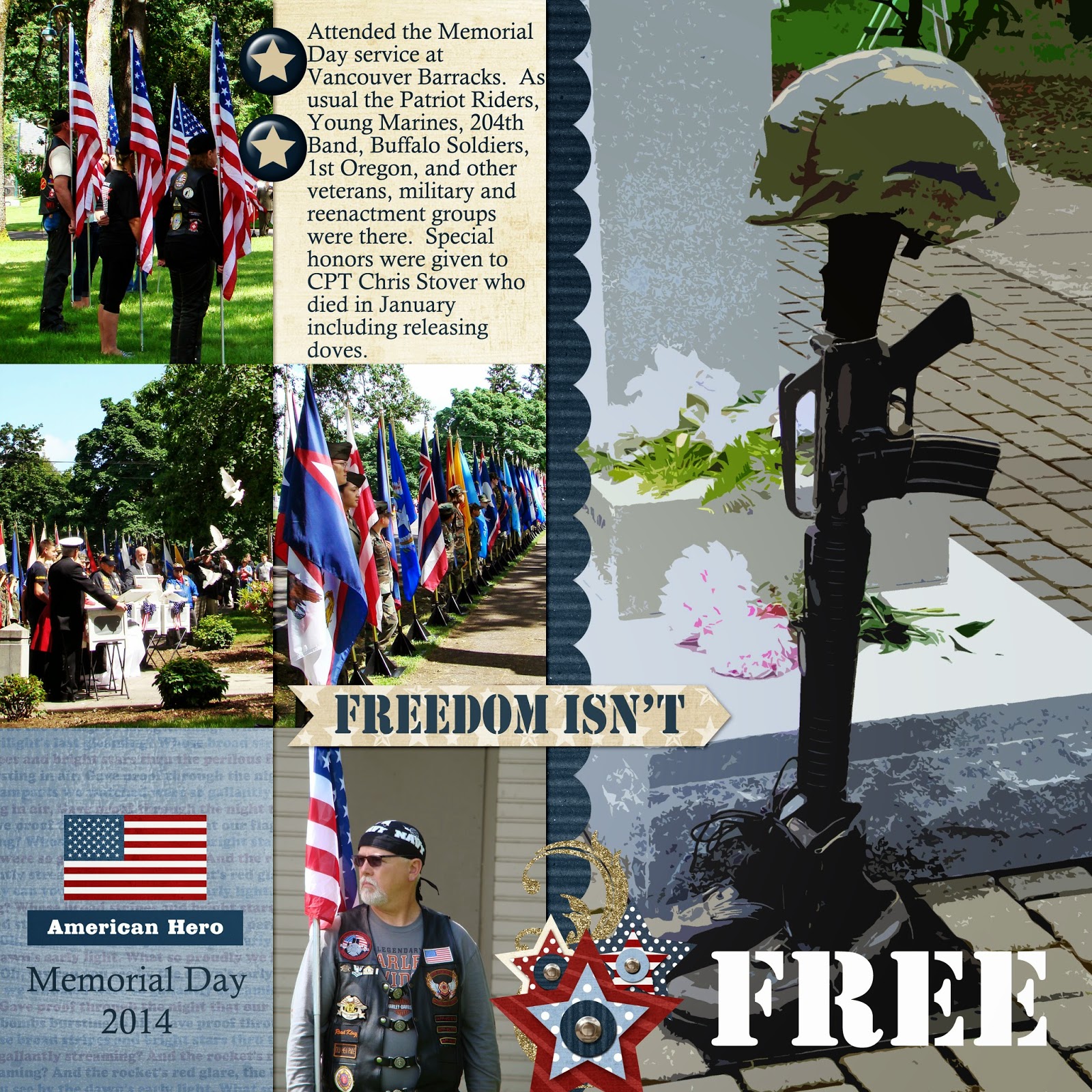 I try to get to the Memorial Day service as often as I can.  I'll admit that I am usually a fair weather attendee.  But I enjoy the gathering and wish to pay my respects to those who paid the ultimate price for our freedom.  It is always a reminder that the freedom we enjoy in this country is definitely not free.  Many have paid the price with their physical and mental health and their lives. 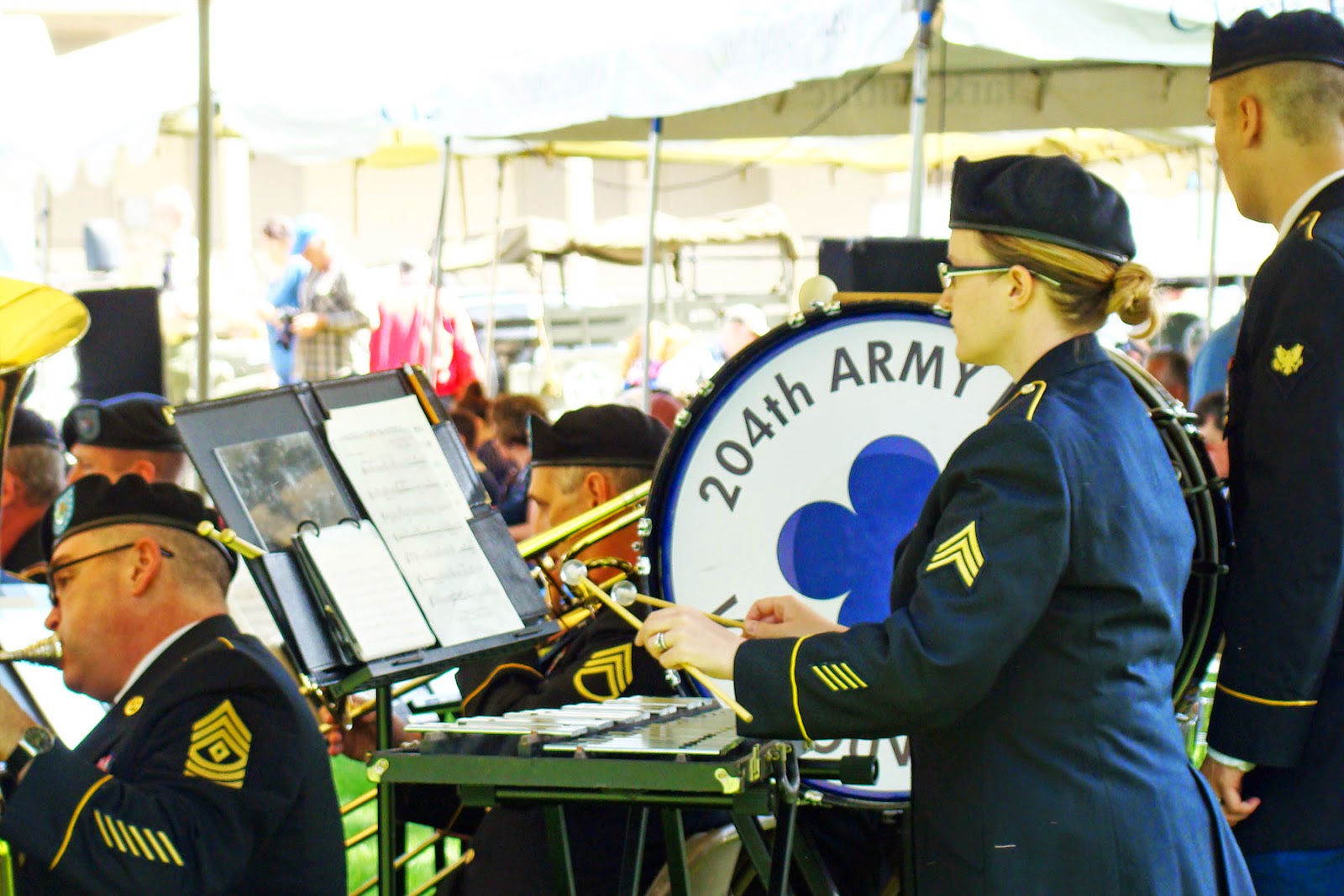 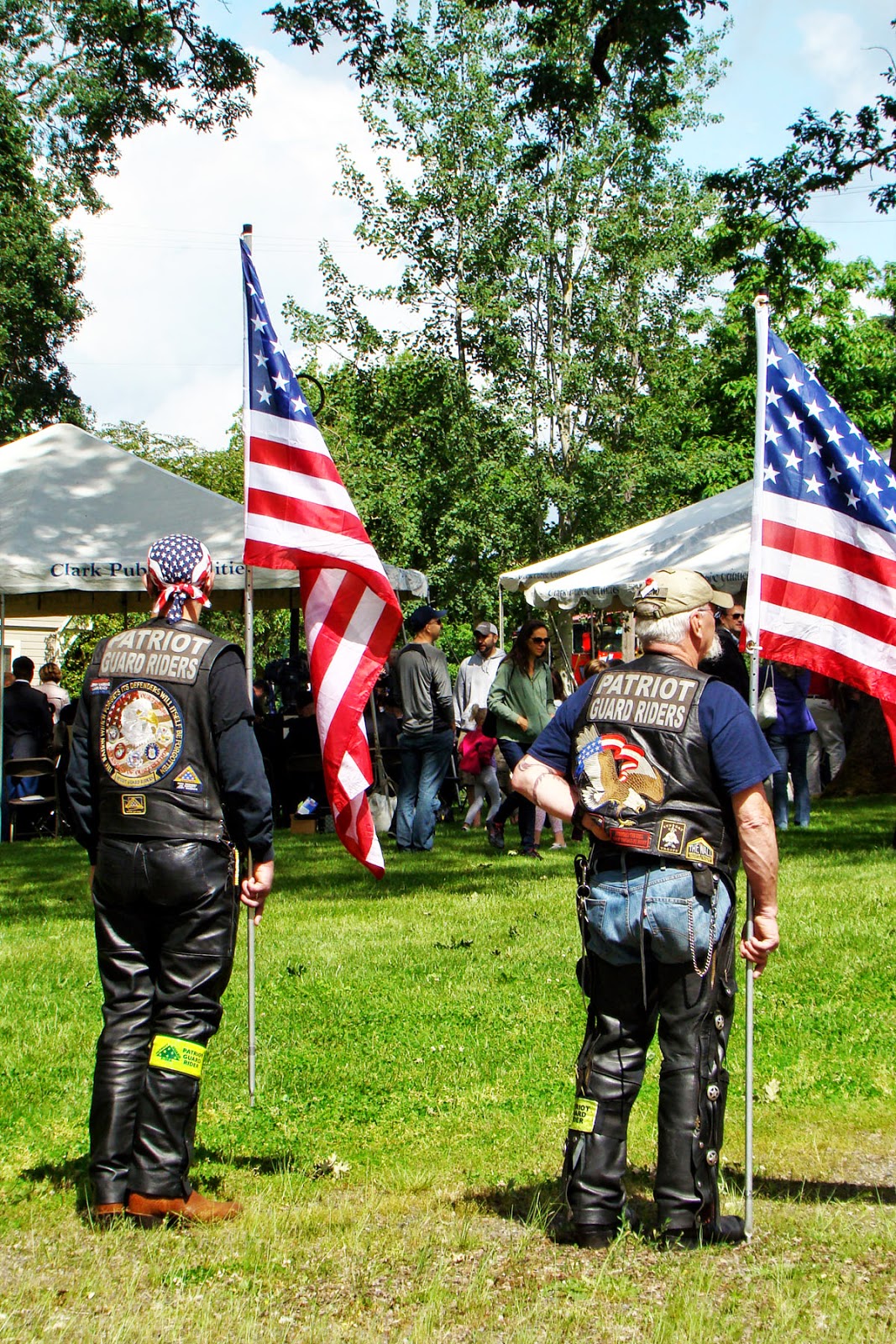 The Patriot Guard Riders ringed the perimeter of the event standing guard with American flags.  The Lewis and Clark Young Marines stood guard with the state flags. 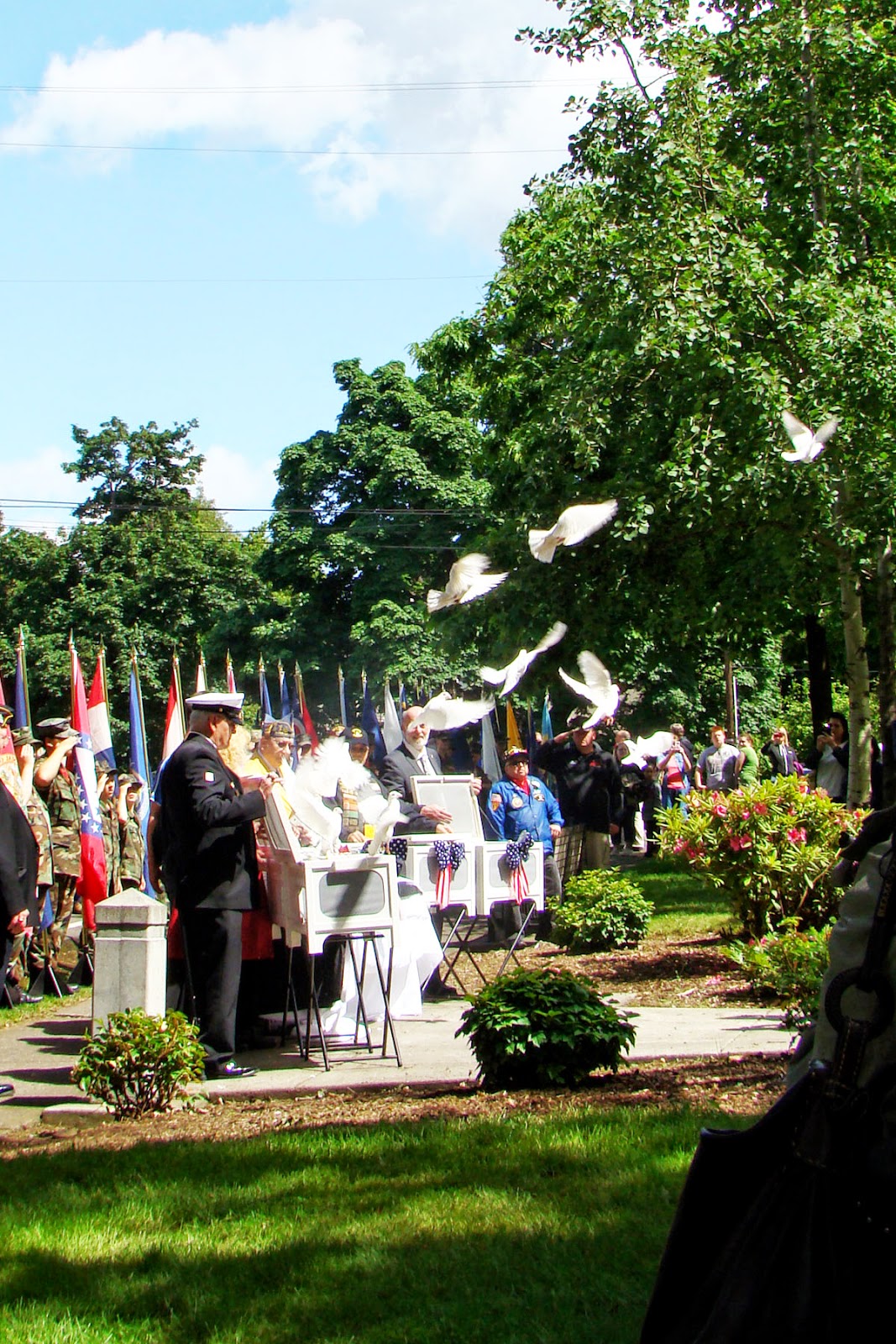 Special recognition was given to CPT Chris Stover who was killed in a helicopter crash in England in January.  He was from Vancouver and died at 28 years old.  Along with all the mention of Chris throughout the ceremony, Chris' parents participated in the release of 51 white doves in honor of all those who have died and one in particular in honor of him. 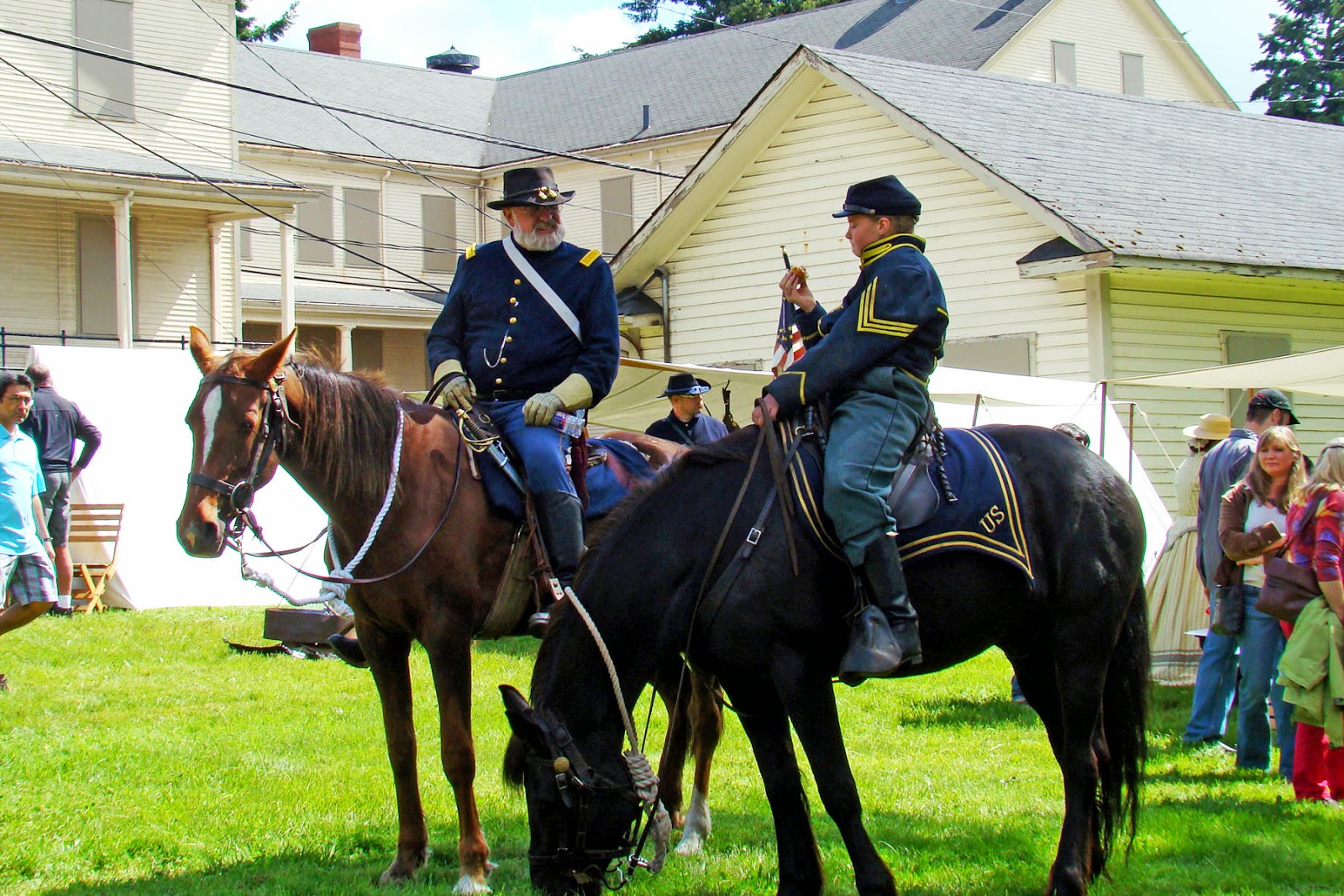 The 1st Oregon was part of the Soldiers' Bivouac as well as re-enactors from other wars. 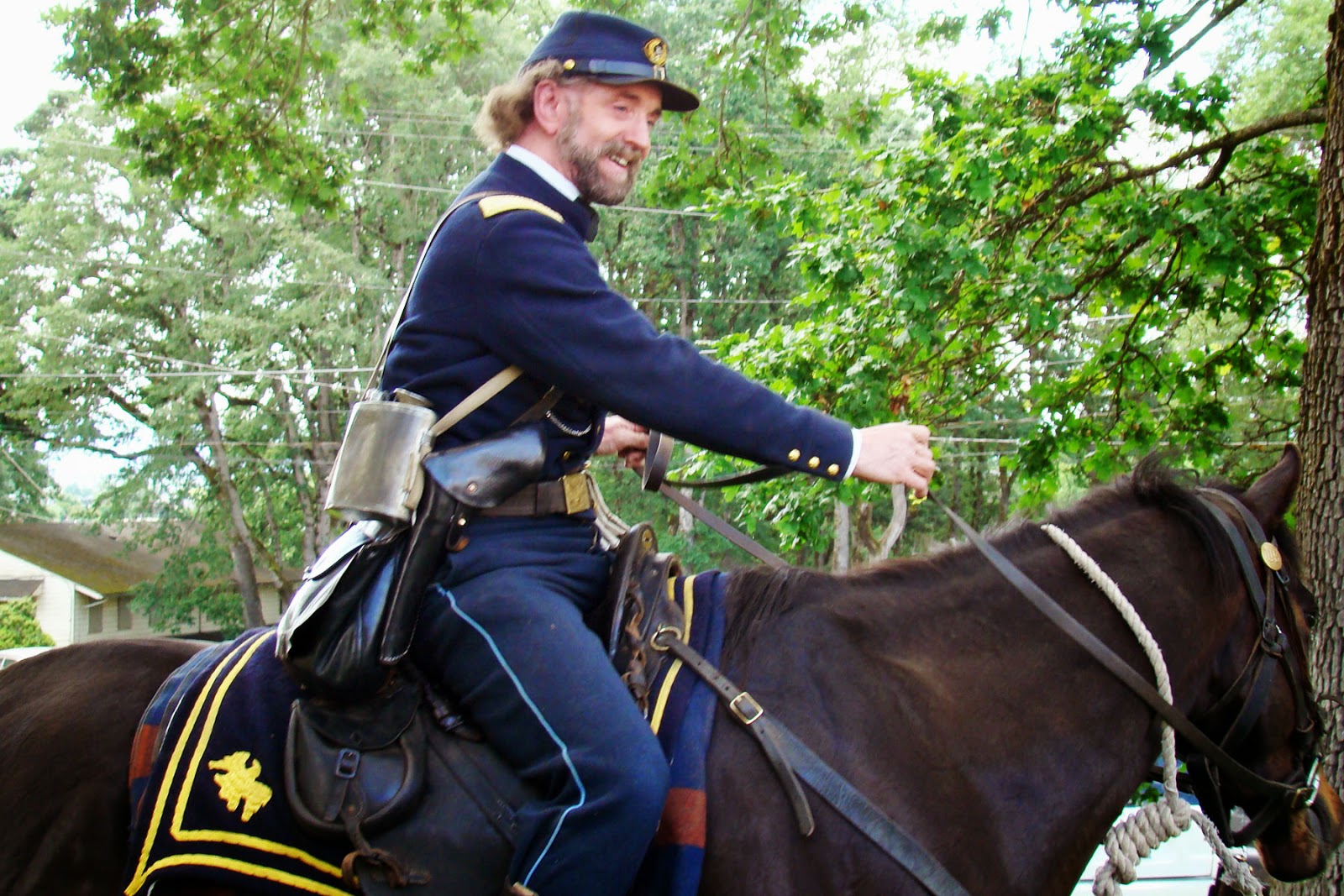 The Civil War reenactors are always the ones that I have the most fun photographing. 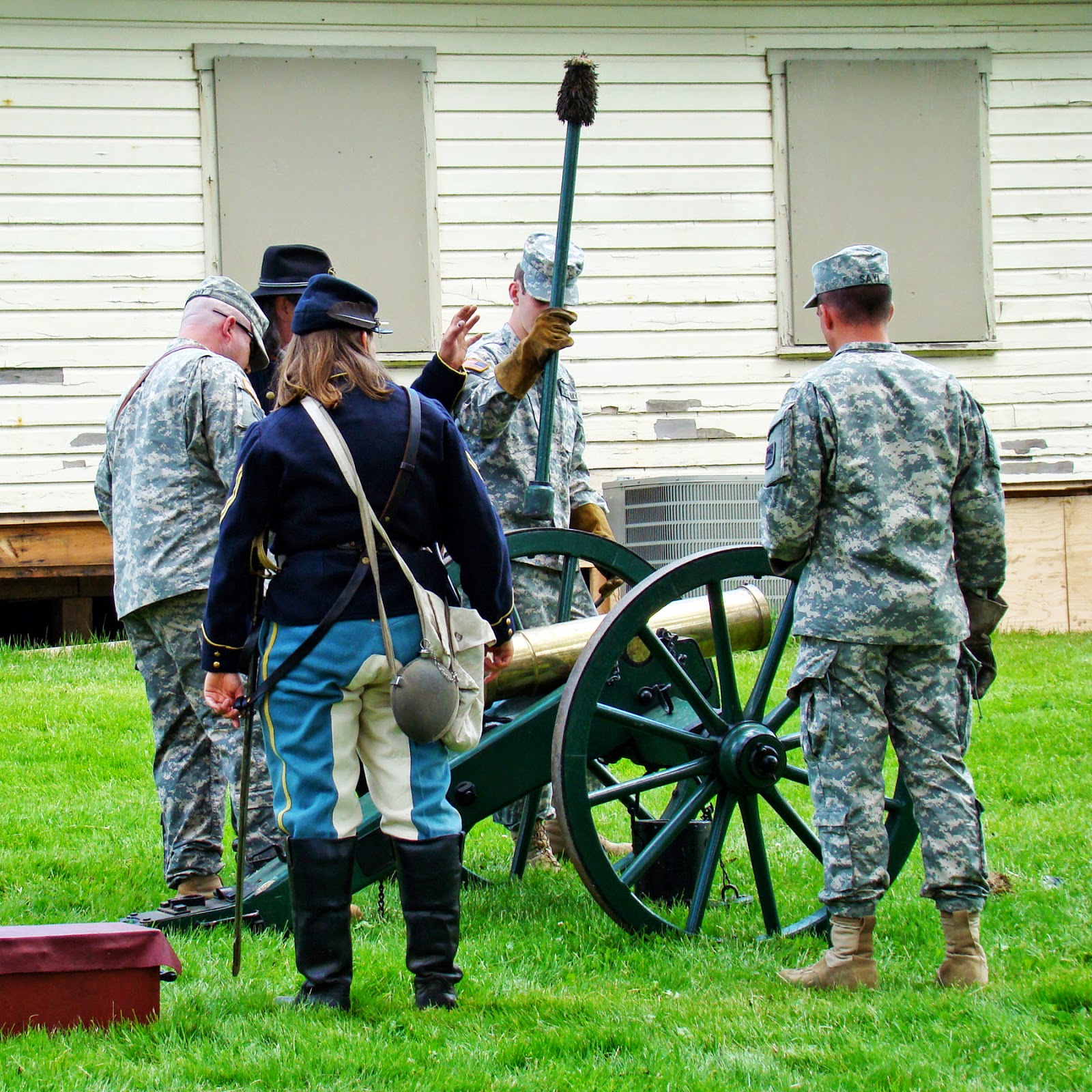 The Washington National Guard did cannon salutes for each service during the ceremony with their modern day cannons.  But the 1st Oregon reenactors let them fire off the Civil War cannon as well after the ceremony. 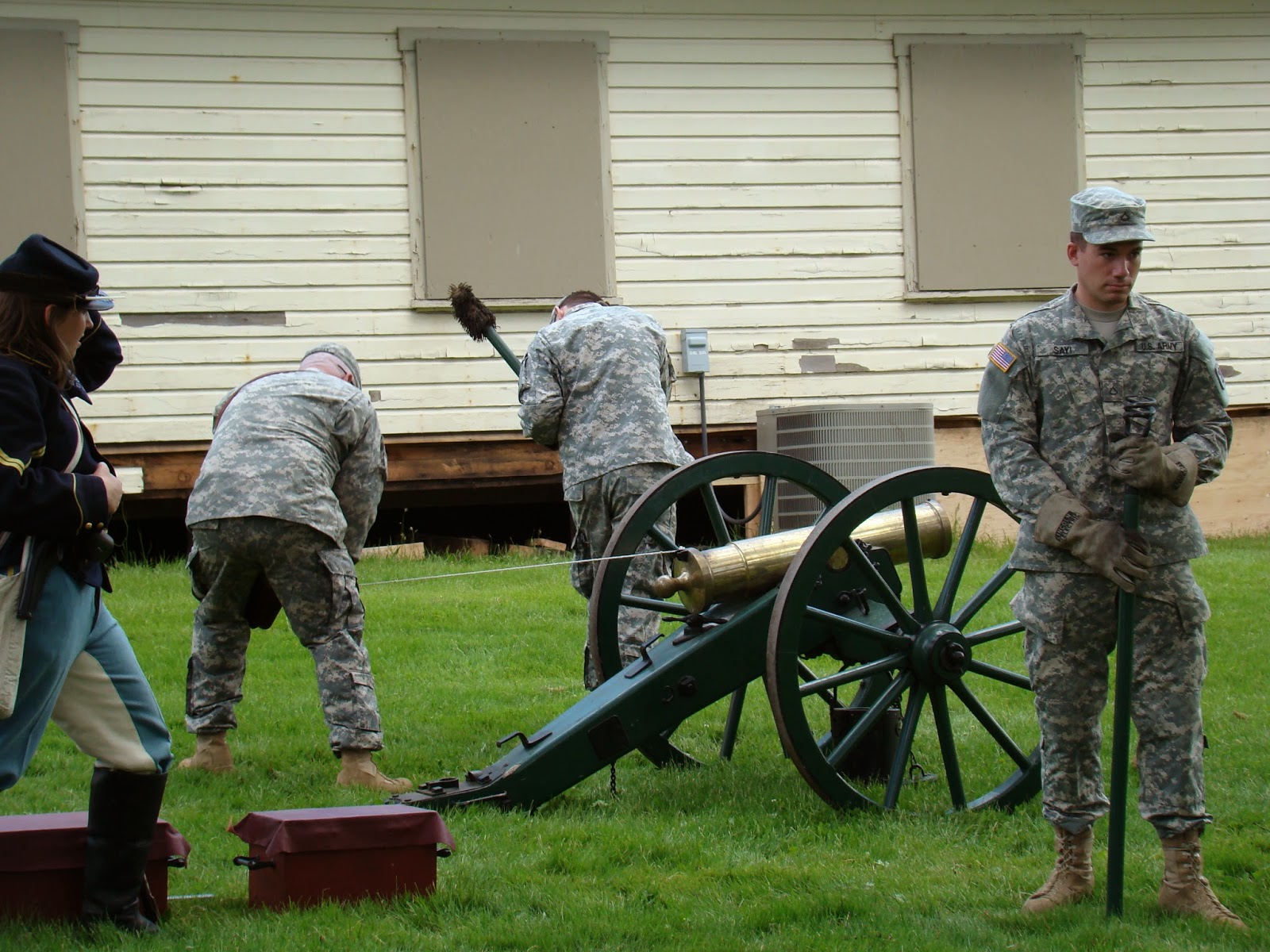 A very moving ceremony.  Tom is getting set to deploy soon.  I don't know where and I don't know when.  Only that he is as he can't tell us.  But with him moving into the ranks of those going to war--I say a prayer each day to keep him and the rest of the men and women in our military safe and bring them home.
Posted by Shannon Roller at 11:07 AM No comments: 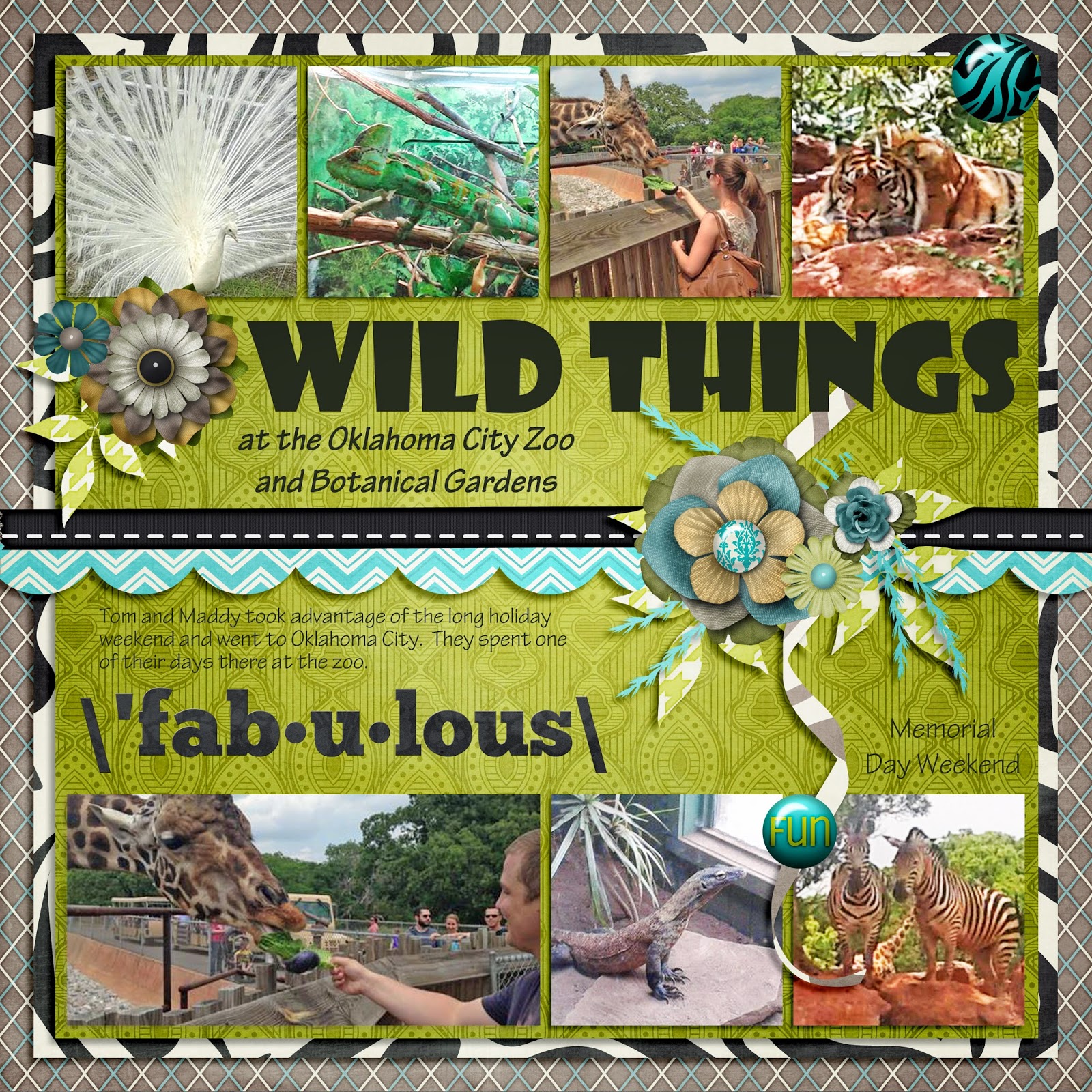 Tom and Maddy took advantage of the long holiday weekend and took a trip to Oklahoma City.  They went to the zoo and Toby Keith's bar while they were there.
Posted by Shannon Roller at 7:47 PM No comments: 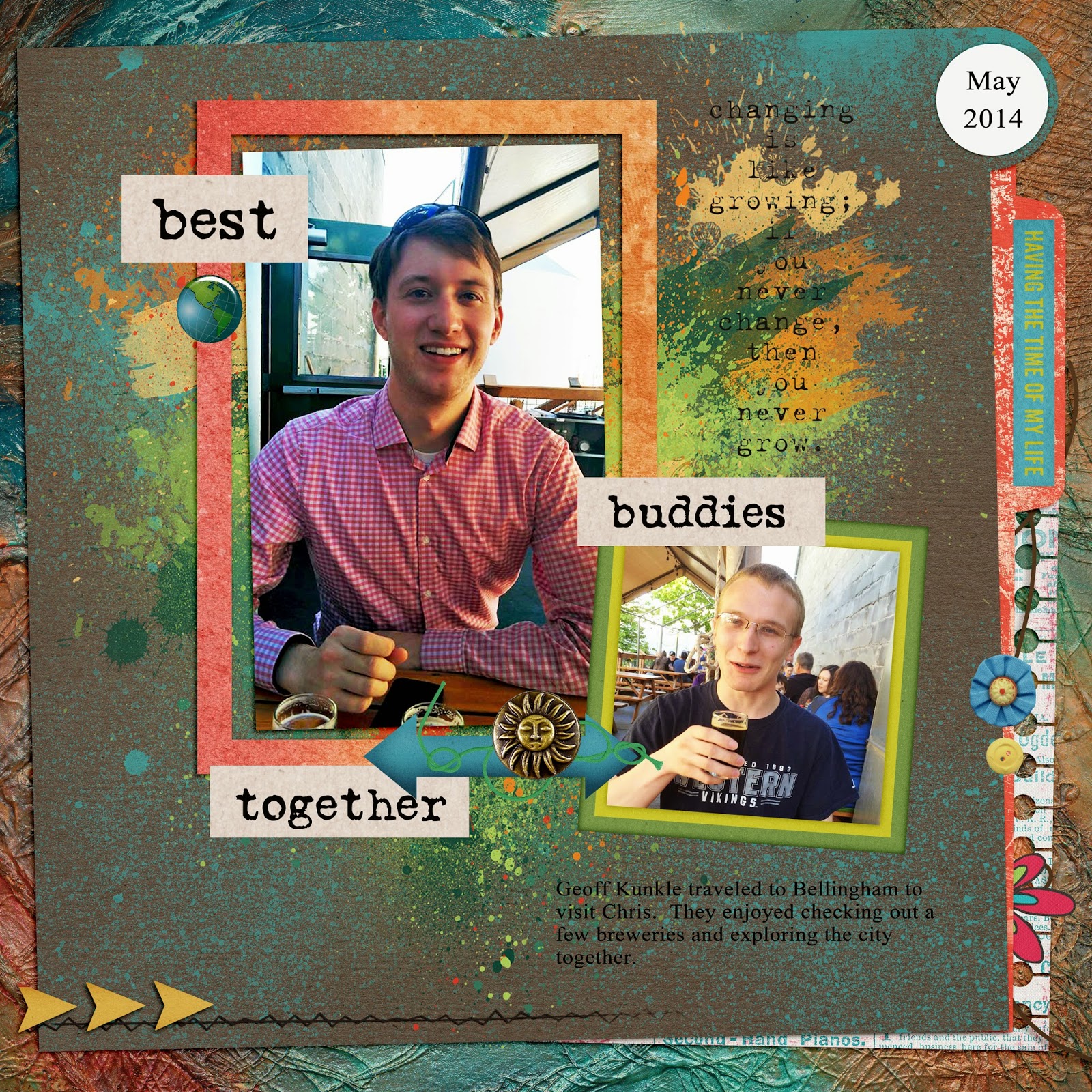 Meanwhile in Bellingham last weekend, one of Chris' friends drove up to visit him.  They enjoyed exploring some breweries and the city together.

Posted by Shannon Roller at 12:55 PM No comments: 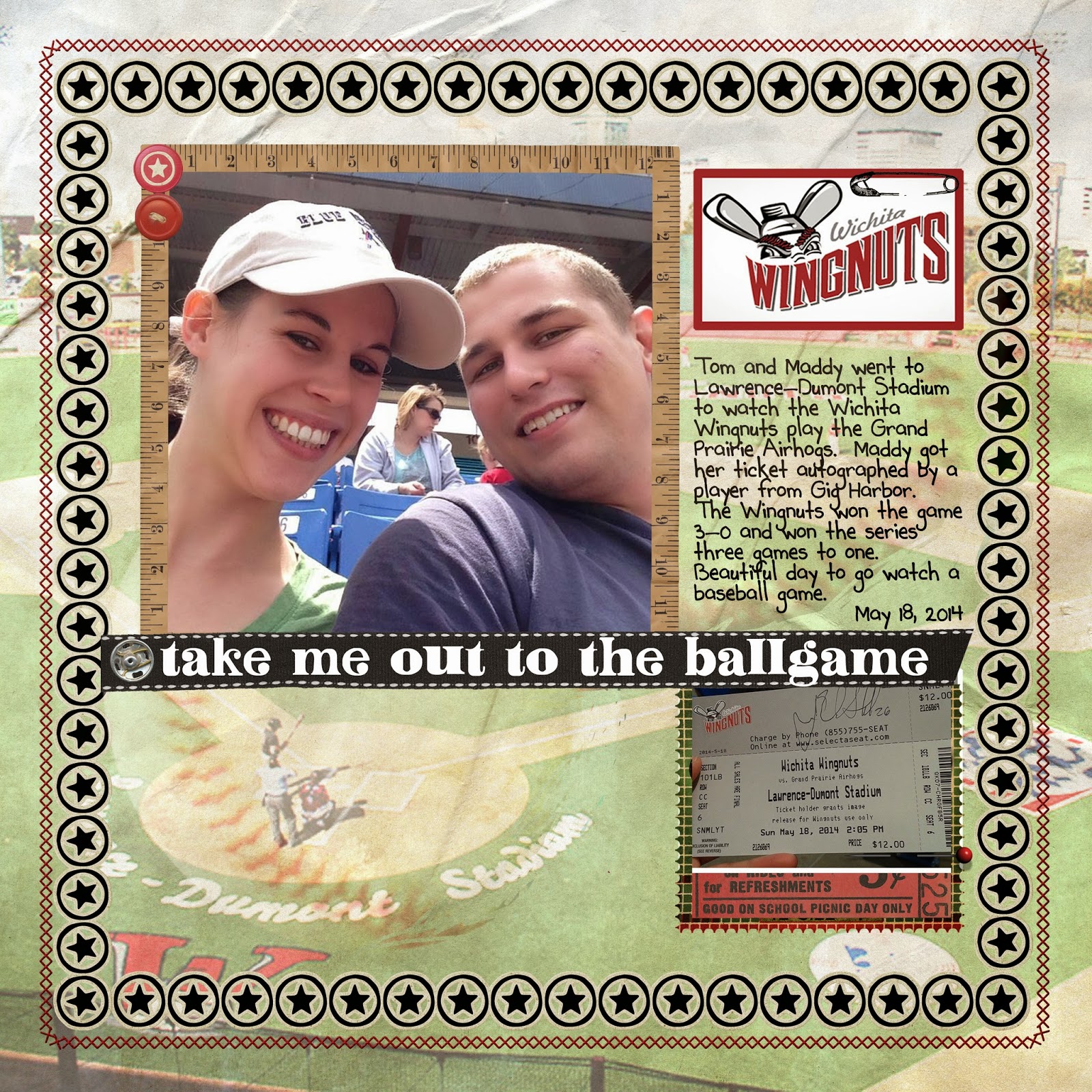 Tom and Maddy had a great weekend in Wichita.  Friday night they went to Ribfest.  They got to hear a Craig Campbell concert at the fest as well as eat some good BBQ.  They went to watch the Wichita Wingnuts play baseball on Sunday.


Posted by Shannon Roller at 6:42 AM No comments: 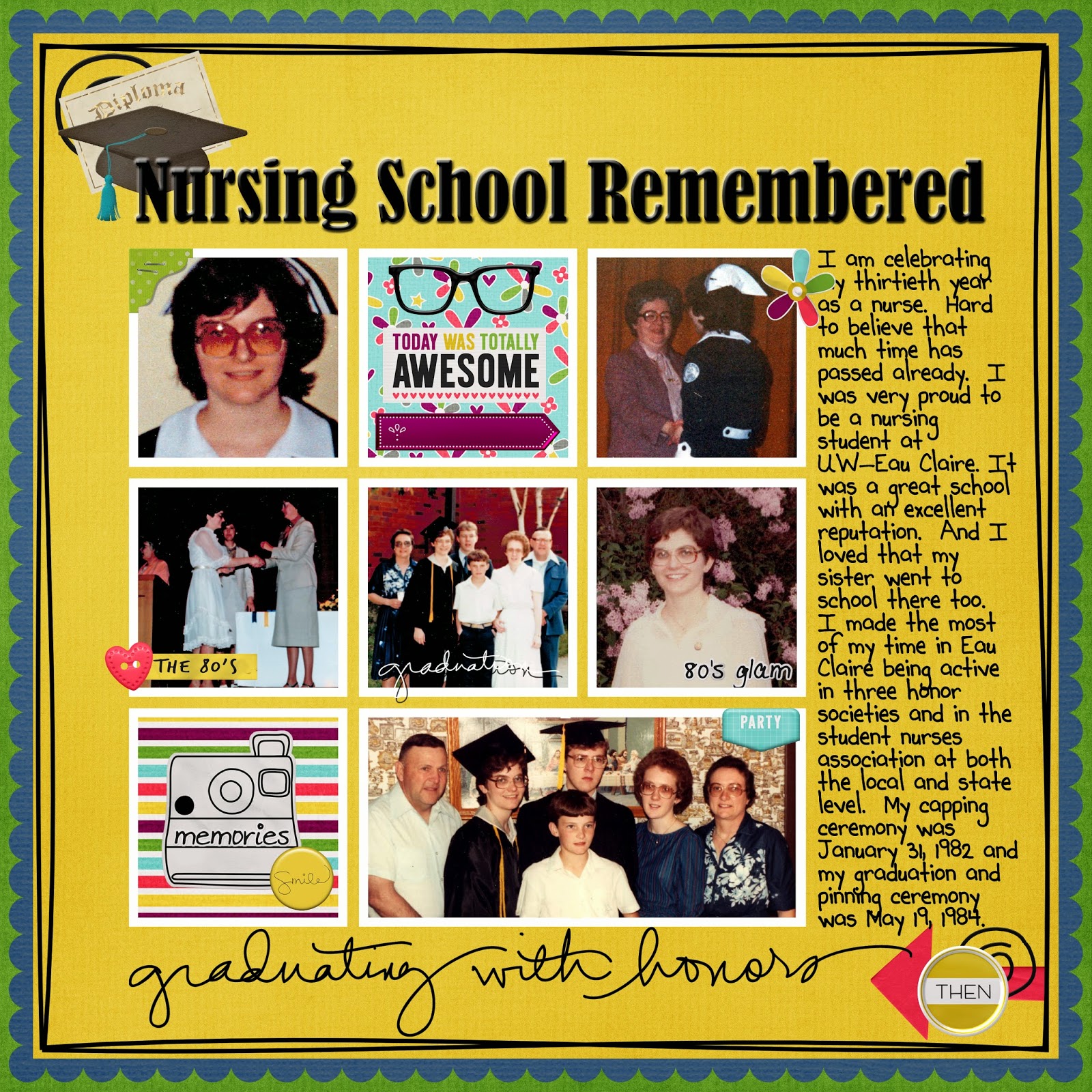 Tomorrow marks the 30th anniversary of my graduation from nursing school.  In some ways, it doesn't seem possible that it has been that long ago.  But then you remember all the changes that you have seen over the years in the way that we dress, the technological advances that we have experienced, having children the age I was and older than I was then and suddenly you realize that a lot has happened in the last 30 years.  I've seen a lot of changes in healthcare and surgical equipment and supplies as well.  Including electronic documentation that is so much a part of my current position.  In some ways, it is hard that I no longer do patient care.  Wanting to do patient care was what my passion in wanting to be a nurse was all about.  But I am looking out for patients and the nurses who care for them in a different way now.  I'm working to make sure that documentation is as easy as possible for the nurses to complete and still be able to do their patient care.  To have information about the patient easily at their fingertips.  And that information about the patient can warn the nurses and doctors that perhaps they shouldn't order a certain medication or a certain dose that may be dangerous.  That is how I make a difference in patients and nurses' lives these days. 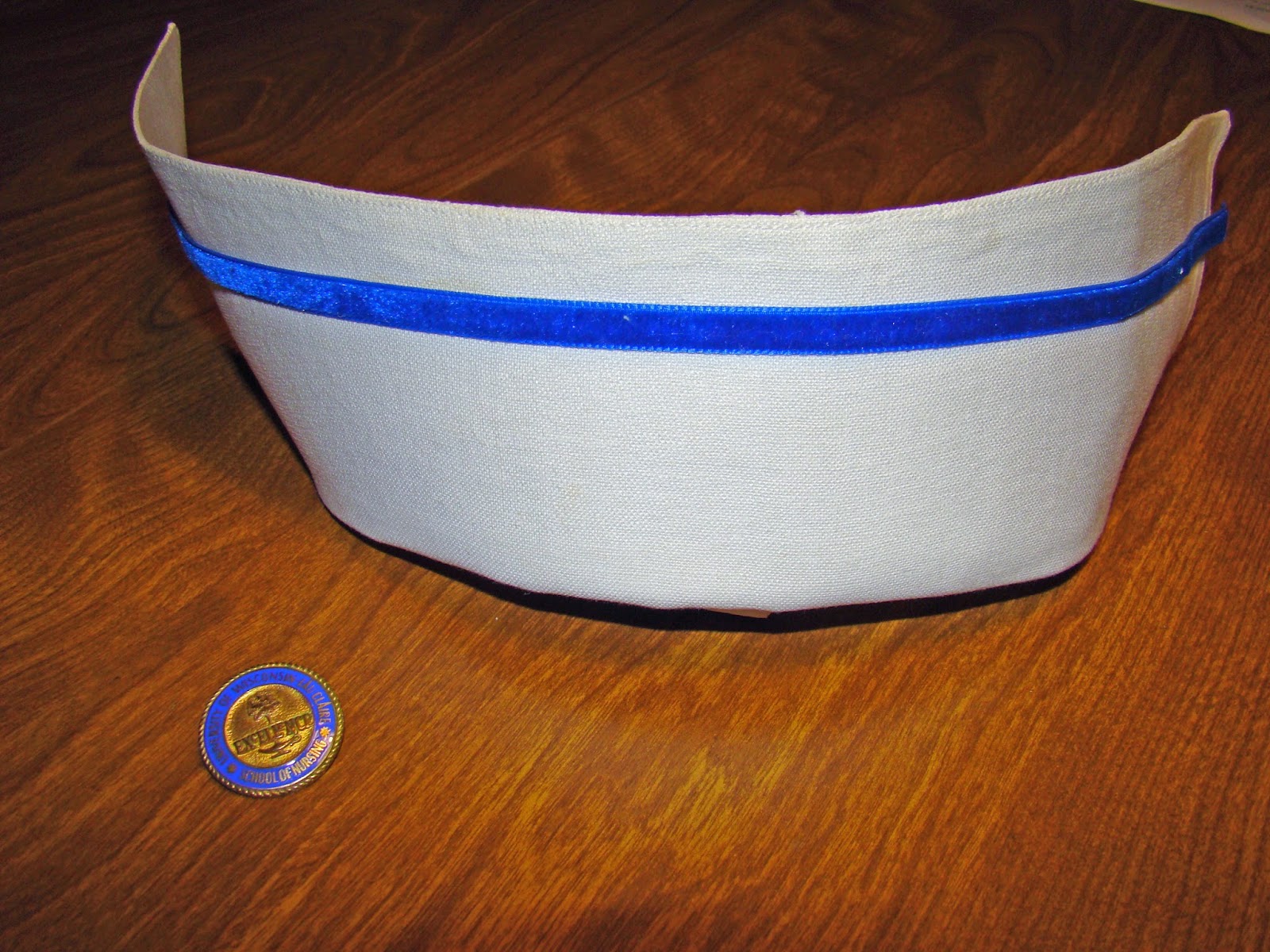 I dug my nursing cap and pin out on Nurses Day this year to take a picture.  It is sad that no one gets a cap anymore.  Since no one wears them anymore, I guess it makes a certain amount of sense.  But the nurse's cap is so much about the heritage of nursing and the nostalgic part of me is so sorry that it isn't a part of current nursing tradition--a rite of passage in nursing education.

Definitely not going to try to go another 30 years--at least not 30 years of working as a nurse.  But I have another 15 years until retirement.  So I'll keep trucking on and continue to marvel at how much will change over the next 15 years.
Posted by Shannon Roller at 4:47 PM No comments:

Oh No! Jake Has Been Arrested

Bill (aka Jake Blues) has recently been arrested.  Here is the video evidence of it.  Shane Gardner of the Clark County Sheriff's Department found Jake on the streets of Vancouver and arrested him. 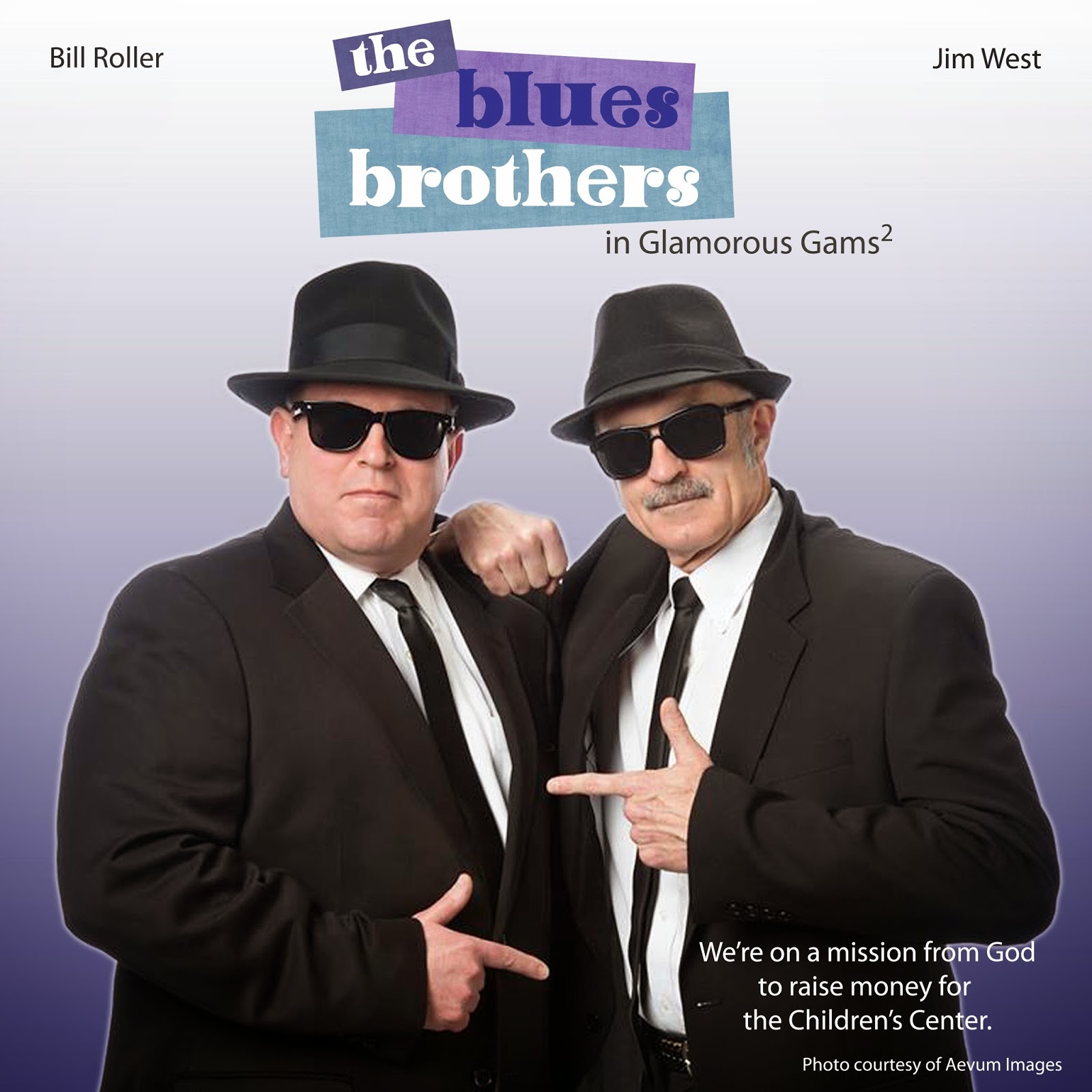 He needs help getting out of jail so that he can make it to his performance at the Hilton on May 31st.  You can go to this website to help donate toward his "bail" and help out the kids in Clark County in need of mental health services at the Children's Center.  Thanks for your help!
Posted by Shannon Roller at 10:03 AM No comments: 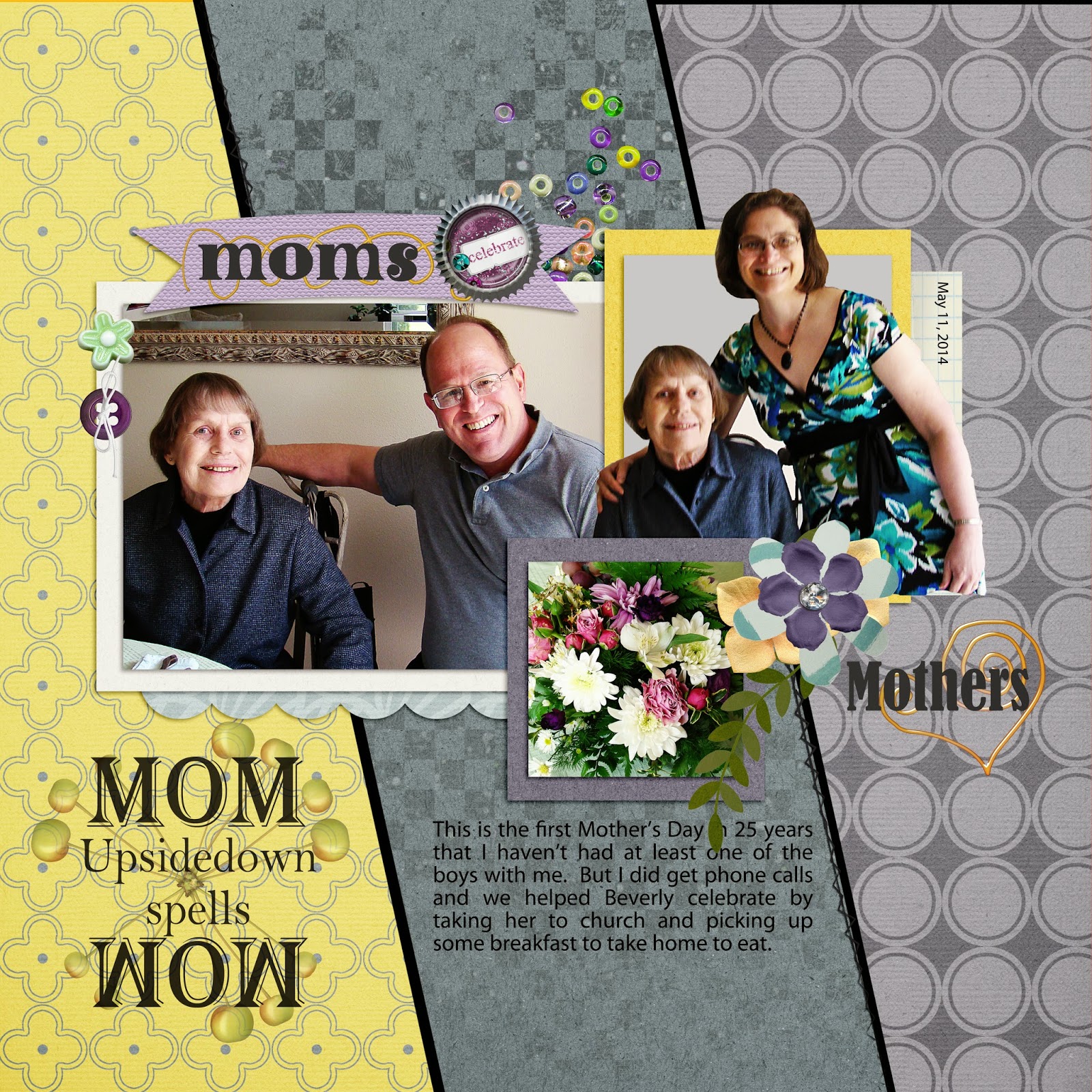 In trying to come up with a catchy scrapbooking title for Mother's Day and something other than the generic "Celebrate", I came across "Mom Upside Down Spells Wow."  Kind of catchy and I would like to think that my family thinks I have done some "wow worthy" things over my 25 years of being a mother.

It was a bit of a bittersweet Mother's Day for me.  As always, I miss that I don't have my mom around to honor.  But this was the first time in 25 years that I haven't had at least one of my sons with me to help me celebrate.  Bill and I celebrated with Beverly though and had a lovely day.

We took Beverly to church in the morning.  Then the plan was to go out for breakfast.  Originally we thought about going to our flying club for brunch but the price was pretty expensive and there was no way the three of us would eat $75 worth of food--especially Bev and me.  So then the plan was to try one of our usual breakfast hangouts but of course, there was a big wait at several restaurants that we went to and Beverly wasn't in the best shape to do any waiting.  So we ended up getting takeout huevos rancheros at Mucho Gracias and called it good.  Really tasty and fed the three of us for $11--a source of pride for Mr. Roller.

I spent the afternoon enjoying sappy Hallmark Channel movies and making corned beef and cabbage for dinner.  Not your typical Mother's Day menu I suppose but I like it a lot so I was happy.  Didn't think about it until later that maybe I shouldn't like it so much since I have high blood pressure now.  So thinking it will have to wait until next St. Patty's Day before I make it again.

So the weather was beautiful, I enjoyed relaxing, talked to my sons on the phone and had some great meals with people that I love.  It was a good day.
Posted by Shannon Roller at 4:27 PM No comments:

Once Upon a Time Prom 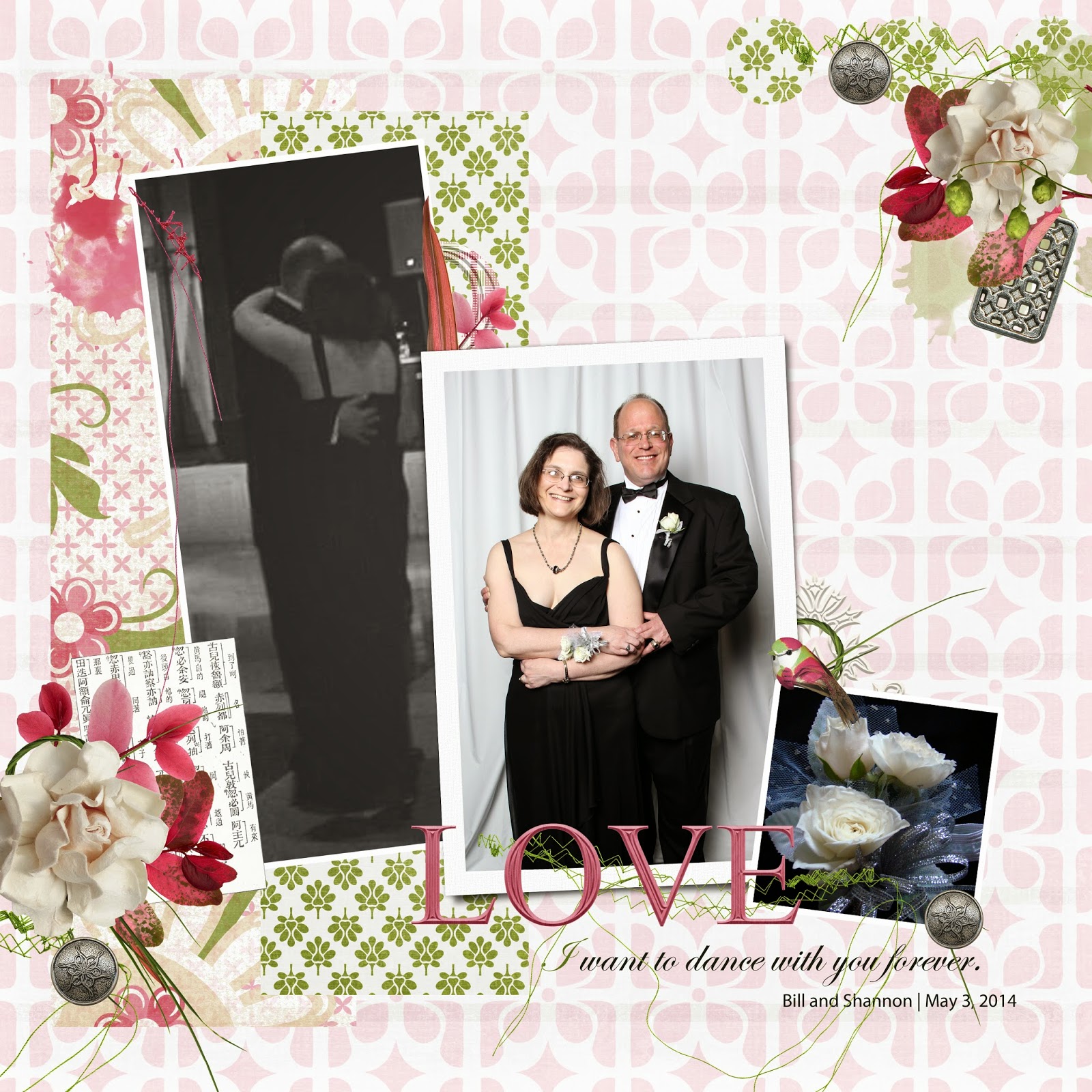 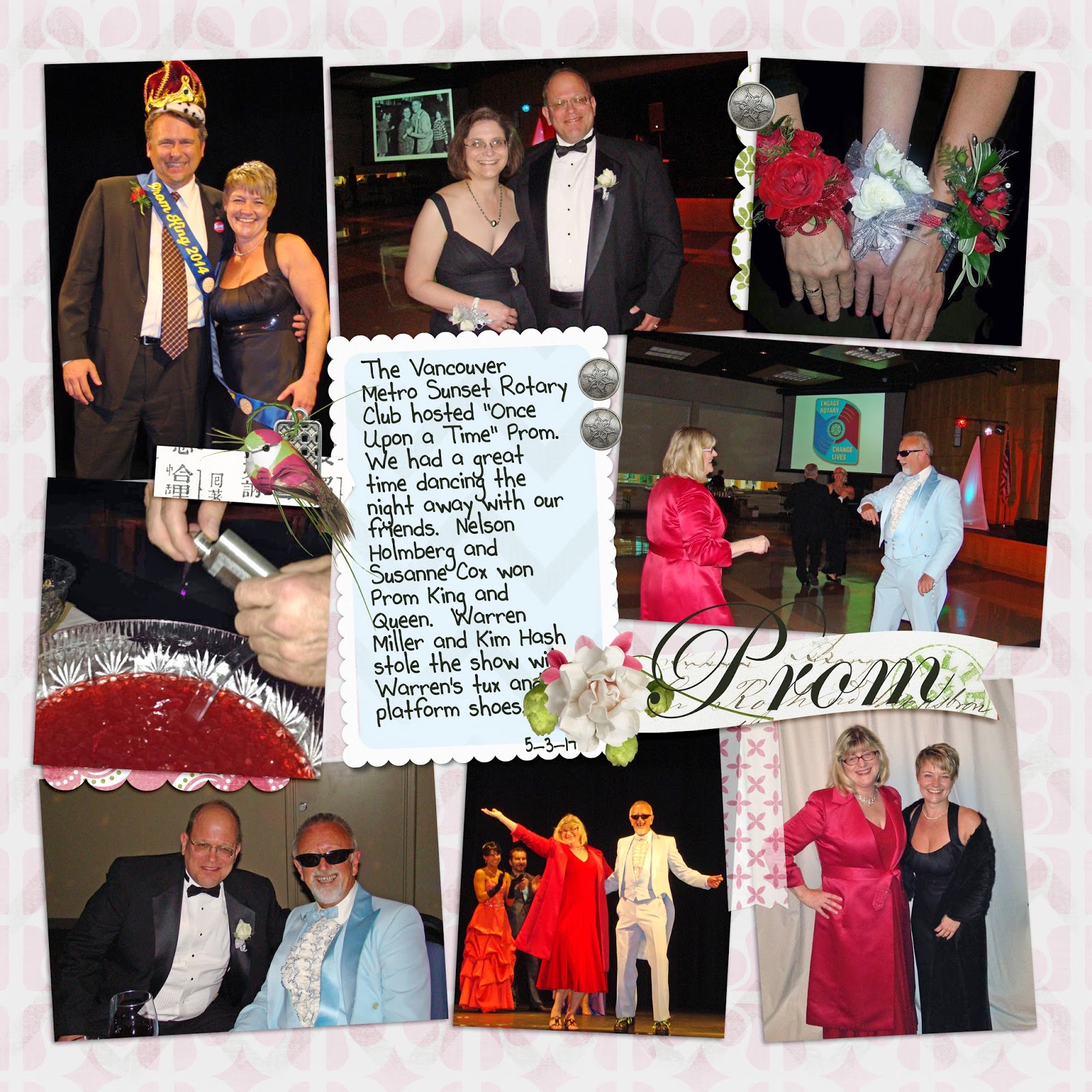 Bill and I went to Prom last night.  One of the Rotary clubs in town put it on and a few of our friends were going so we did too.  I didn't date in high school so I missed out on going to prom back in the day.  It was kind of fun thinking about the concept of going.  As one of my Army friends pointed out--I have been to plenty of military balls and other gala events over the past 30 years.  There is just something about "going to the prom" that resonated with me.

Originally I was going to just wear something that I already have in my closet but my co-workers convinced me to look for a dress at Goodwill--maybe even get something from the '70's.  No luck in finding a '70's costume but I did find a great dress for only $15.  Score!  I got lots of comments on how great I looked--even a "you look really hot" comment.  Kind of fun hearing that at my age.  And since I didn't have the experience in high school, I decided I wanted a corsage so I bought my corsage and a boutonniere for Bill.  Amazingly enough--the flowers cost more than double what I paid for my dress.  I had no idea that they were that expensive.  But it did make for fun photo opportunities.

We danced the night away with our friends.  Nelson Holmberg and Susanne Cox won prom king and queen for raising the most money for the Vancouver Police Activities League.  They had a "best dressed" contest of sorts.  Kim Hash and Warren Miller won the costume contest.  Literally a half hour before they came, a friend pulled out the baby blue tux with tails, ruffled tuxedo shirt and platform shoes for Warren to wear to the prom.  I think he was the only one who truly dressed to the era of his high school days and it was pretty cool.

I don't truly have a bucket list but if I did, going to prom would probably be on the list and now I can check it off.  And maybe I'll even go again next year.

Posted by Shannon Roller at 10:53 AM No comments: 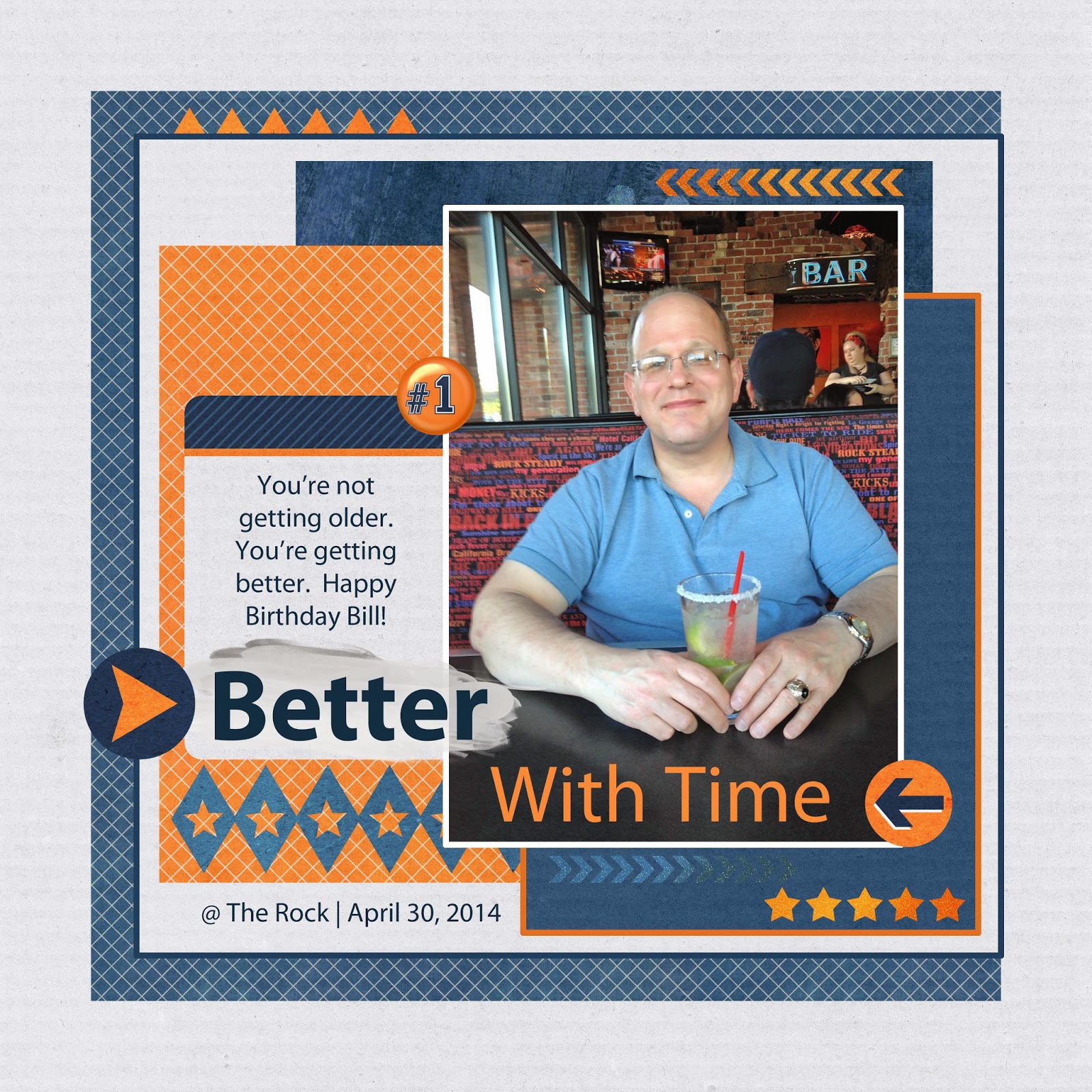 We've been celebrating Bill's birthday this week.  We celebrated with his mother on Monday having his favorites--steak, brussel sprouts, red wine and chocolate trifle.  On his actual birthday last night, we went on a date to The Rock and had pizza and margaritas.  Happy Birthday Darling!  Love you lots.

Posted by Shannon Roller at 8:15 PM No comments: