I have had such a busy month of travel that I thought I had better catch up with a new post. 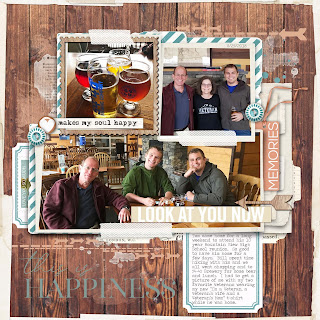 Tom had his 10 year high school reunion in August.  How is that possible?  He was able to get leave and come home for it.  It wasn't very well attended-only about 40-50 out of a class of nearly 500-but he had a good time.  He and Bill did some hiking together and we all went shopping and out for beer and lunch at 54-40 Brewing in Washougal.  He also spent some time with friends.  Otherwise it was a pretty low key weekend with him. 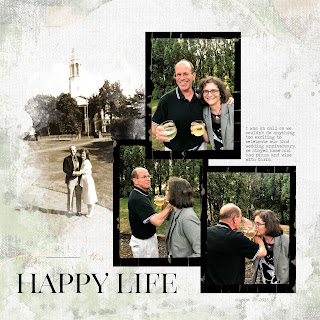 I was on call for our anniversary so we didn't plan anything very exciting.  We had pizza and wine with Chris and re-enacted our marriage toast. 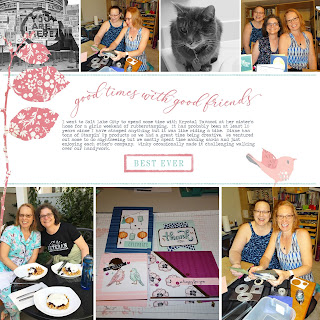 The next morning I headed to Salt Lake City for some girl time.  Krystal invited me to join her there while she was visiting her sister, Diane.  The plan was to do lots of rubberstamping of cards but we fit in some sightseeing as well. 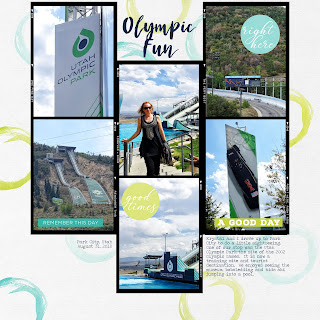 Krystal wanted to take me to Park City.  We had no plans so we stopped at the visitors center for some ideas.  We were convinced to at least spend a little bit of time at the Utah Olympic Park to see the museum and watch some bobsled runs and ski jumping into a pool.  It was interesting to visit there. 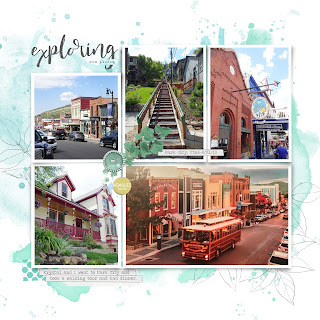 We also found out about a walking history tour and were there at just the right time to go on it.  As it turned out, it was the last one of the year so we were especially lucky.  It was interesting to learn about the history there and about some of the buildings. 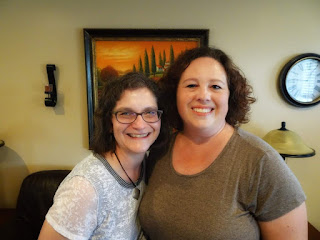 Renee lives north of SLC by about an hour and a half.  I wasn't sure I was going to be able to visit her so I didn't make any promises.  As it turned out, she was having a BBQ for some friends on Saturday afternoon and invited us to come up.  Worked out so that I could go see her and her family and home which was a bonus. 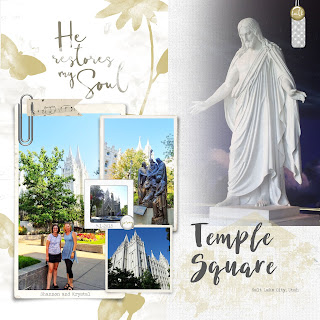 After Krystal and I got back to SLC, it was time to head downtown to visit Temple Square and have dinner out.  We enjoyed walking around the square and seeing the visitor centers before having a very interesting meal at a place called Eklektik.  Very unusual decor and menu but enjoyable. 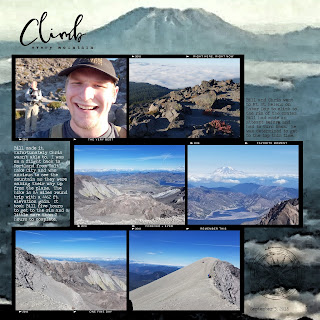 I flew back home on Labor Day while Chris and Bill were making their way up Mt. St. Helens.  Several years ago, Bill and Chuck made an attempt but they only got about half way up before having to turn back.  This year, Bill was determined that he was going to be in good enough shape to make it. And he did.  Unfortunately, Chris got sick about 2/3's of the way up and had to stop.  He sat at a monitoring station while Bill finished his hike up before they headed back down. 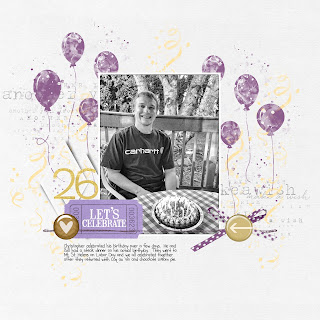 Chris celebrated his actual birthday with Bill by making a steak dinner.  He requested Coq au Vin for his birthday celebration with me after getting back from the mountain and we had chocolate cream pie too.  Hard to believe he is 26 years old already. 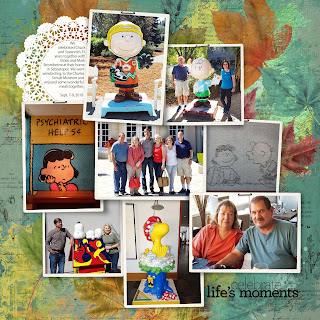 The next weekend we flew to Santa Rosa to spend time celebrating Chuck and Suzanne's 35th wedding anniversary.  Mark and Vickie (Suzanne's sister) invited us to their home in Sebastopol for the celebratory weekend.  The anniversary was actually in July but it was the first weekend that we could all workout in our busy schedules to get together.  We had a great weekend that included wine tasting at the Coppola Winery.  Fascinating place.  It is like a museum, water park and tasting room all in one.  We stopped by Ferrari Carano to do some tasting as well. Such beautiful grounds and gardens there.

The next morning, Mark took Bill and me on a tour of his four acre pinot noir vineyard in their backyard.  We enjoyed the little walkabout and learning more about the grape growing business as he has learned it.  Next up was going to the Charles Schulz Museum and other buildings on the complex.  We had a very informative tour guide which was nice.  We stopped at the Warm Puppy Cafe, the skating rink that Charles Schulz built for the community and the Snoopy's Gallery and Gift Shop.  After lunch we rested up before heading to Sonoma for dinner at La Salette-a Portuguese restaurant.  Wonderful food and company.

Sunday morning we flew home after a lovely brunch and stroll around the neighborhood. 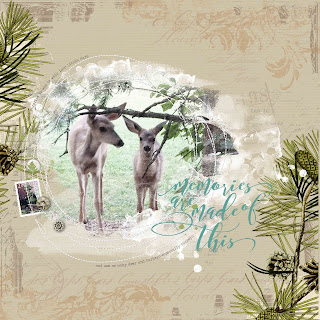 We were home for three days and then headed down to Ashland for a flyout.  We went to a cocktail party at an old Victorian home that is now a restaurant our first night there.  Friday morning I headed to Lithia Park in the morning for a walk before we went to the activities of the day and came across several deer and turkeys.  I subsequently went every day to saw them and kept trying to get pictures of them.  I was particular surprised to see so many turkeys.  I have gotten used to seeing deer in town at so many of the places I have gone to recently but not turkeys. 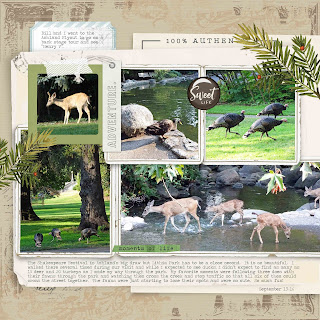 These are some of the better photos that I took.  My favorite is of the deer crossing the creek.  There were actually three does and three fawns that I followed for several minutes.  After they crossed the creek, they stopped traffic until all six of them crossed the street. 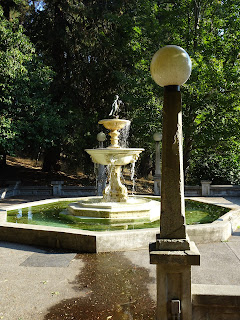 And I loved this fountain in the park and how it looked in the morning light. 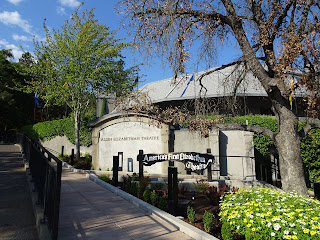 Unfortunately there isn't anything really that you can take photos of that are Shakespeare Festival related as no photography is allowed at any of the theaters--even on the backstage tours.  But I did take this photo of the outside of the Elizabethan Theater.  We went on the backstage tour which was fascinating.  Hard to believe there is so much technology involved in plays.

We saw "Henry V" in the Thomas Theater which was very well done.  After the play, we went out to dinner at a French restaurant as a group.  I got to sit next to Amy Kim Waschke at dinner.  She is the niece of one of our members and is currently playing in "Othello" and "Snow in Midsummer".  Her husband played the Dauphin in "Henry V" so that was a fun connection as well.  It was also fun to learn that she is from Bellingham and actually told her about a place that I love there that she had never heard of or been to.  She is going to play Lady MacBeth and the Queen of Hearts in "Alice in Wonderland" next year so it peaked my interest in maybe wanting to go next year having gotten to know one of the performers. 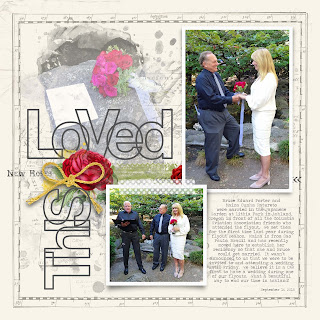 It was a surprise to learn that we were all invited to attend a wedding on Sunday morning before we came home.  We met Bruce and Maiza last year at a flyout and became reacquainted this year at the Sunriver flyout.  Maiza is from Brazil and recently moved to Portland to establish her 90 residency so that they could get married.  They have been trying to get married for over a year but plans to marry in Brazil fell through.  They got married in the Japanese Garden at Lithia Park at 0900 on Sunday morning so that we could all attend before we flew home.  We think it is a first to have a wedding on our of our club flyouts and it certainly was a beautiful way to end our time in Ashland.

So there you have it.  A quick recap of the past month or so.
Posted by Shannon Roller at 11:06 AM No comments: