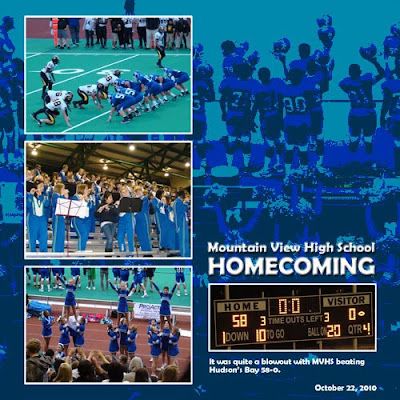 Tonight was the last home game of the season so it was senior night and it was also homecoming. I have sort of dreaded this night. This is the last game that I have a good excuse to go to. It is the last time that I have a son playing football or playing in the band. So it was a little bit sad for me. I have been attending middle school and high school football games for the past nine years. When Tom was playing football, I would attend as many as two games a week the whole season long. The last four years it has been just varsity home games but I always look forward to them. I love watching football and seeing all the energy put out by the team, the cheerleaders, the band and the students. I love the cheering and the music. Chris has always grumbled that he had to play in the band at football games because he doesn't like football. But I love going. I might go again. I'm not ruling it out. It is just pretty unlikely as it wouldn't be any fun going by myself. With Tom gone now, I don't have a buddy who likes football to go with.

With it being the last game of the season, they had the usual senior parent recognition for the football team and the cheerleaders. I was surprised to see a friend of Tom's on the field with his parents and his brother who was a senior player this year. He goes to American University in Washington, D.C. but he must have thought it was important enough to fly home to see his brother play in his last Thunder football game.

None of my pictures turned out but the tradition of all the schools around this area is to have the homecoming court brought in front of the stands in Corvettes and this year was no different. Three of the boys and at least one of the girls were in band. One of the band members was crowned king.

The game itself was a blowout. Mountain View beat Hudson's Bay 58-0. I felt so badly for the other team. How do you keep playing when you are getting hammered like that?

So it was a good night. The band was featured on Fox12 Friday Night Lights as the Band of the Week. Chris shows up in the video twice--once in the first few seconds and once in a closeup about midway through. Before you even start the video, he is in the middle of the screen just above the play arrow. Exciting to be able to see him on TV. Here is the link to the video. Mountain View High School Band of the Week.
Posted by Shannon Roller at 9:07 PM No comments: 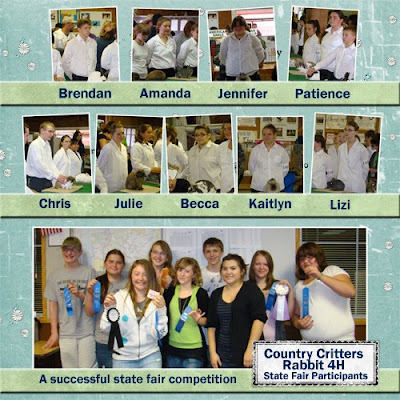 Thought I would post this in honor of National 4H Week which was this week. State Fair was actually 3 weeks ago but we weren't able to get all the kids together to get a picture there so we waited until the award ceremony Thursday night to get a picture of them all together. All but one of the nine kids that went to state got blue ribbons in fitting and showing and they made a good showing in the judging competition and rabbit conformation as well.
Posted by Shannon Roller at 8:20 AM No comments: 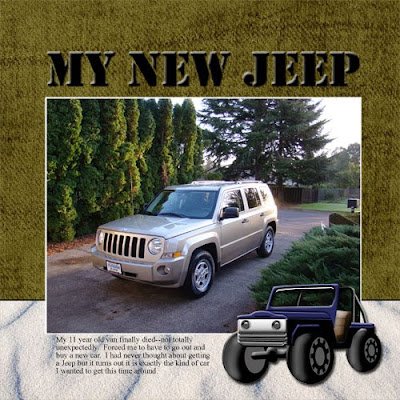 We've known since May that my 11 year old van was in need of a bunch of repairs. But since we had just bought a car for Bill a week earlier, we decided to just baby it along and hope it lasted at least until the end of the year. I didn't want to drive it out of town but Bill and Tom risked it to move back to college a few weeks ago. It has been leaking oil for awhile and radiator fluid for a bit too. When I went into the garage on Saturday, there was radiator fluid all over the floor of the garage and barely any in the car. Bill wasn't home but I made an SOS call that we needed to go car shopping right away.

Bill really wanted a van again but I was looking at used vans and everything seemed out of range of what we could really afford to spend. Looked at various small SUV's thinking that might be the way to go but they seemed so expensive too. So I didn't want to go the van/SUV route and wanted something smaller and more affordable. I never even considered a Jeep but the sales guy at the dealership said that a new Jeep Patriot was in the price range that we were looking at. I knew we had the compromise I was looking for then-a bit smaller vehicle but plenty of storage room in the back if you put the back seats down.

As usual, car buying is such a painfully long experience. I think we were at the dealership three hours before we were able to leave. I am so relieved to have a new car and not have to worry anymore about when the old car was going to die. But I'm not looking forward to having two car payments again after going so long without. I'm sure we will manage though and I am so going to enjoy my new ride.
Posted by Shannon Roller at 8:00 AM No comments: 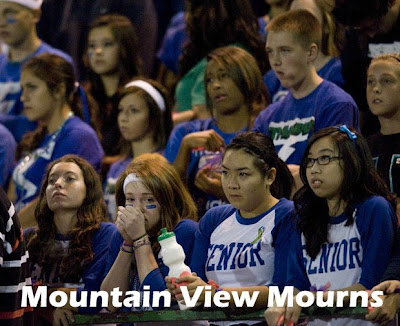 It has been a difficult week at Mountain View High School. In two separate tragedies on Tuesday and Thursday, two of the students died. Tuesday night, three 15 year olds were driving in a truck too fast and rolled it over. One of the boys didn't have a seatbeat on and died. Last night, a 17 year old girl was hit by a train. Just weeks ago, four Mountain View students were driving at 3 a.m. too fast, lost control and had an accident. One of the boys wasn't wearing a seatbelt and was very seriously injured. It has been said by other students that he is paralyzed. All of these incidents are such tragedies but they probably should have never happened in the first place. Why is it that no matter how much we get the word out that kids should wear seatbelts, there are always those stories about people who are thrown from cars in accidents because they weren't wearing one? How did three 15 year olds get keys to a truck to get into an accident in the first place? Even if the driver had a permit, there should have been an adult with him and those other boys should have never been in the truck with him--even with an adult driver supervising. The teenagers out on a double date at three a.m. should have never been driving at that time of night. Teenage drivers have curfews in Washington state. And if the rumors are correct, why did a 17 year feel she needed to end her life by walking into the path of a train? And if they aren't correct, why was she walking on the tracks in the first place? It all just seems so senseless.

Grief counselors have been at school two days this week--Wednesday and today. The kids wore tee-shirts in memory of the boy killed Tuesday. The pep assembly was canceled due to the girl dying last night. There was a moment of silence for both of them at the Mountain View-Union football game tonight. Union students wore blue hearts to school and the game tonight and had a banner "U Loves the View" at the game. They also gave hearts to the Mountain View students at the game that said the same thing. It was touching that the rival high school gave so much of themselves to honor Mountain View in their time of grief.

We need to hold our kids close and be so thankful they are alive. Kids make poor choices all the time. Fortunately, most of the time they survive those mistakes. But there are those times that lives can be taken away in an instant.
Posted by Shannon Roller at 11:07 PM 1 comment: